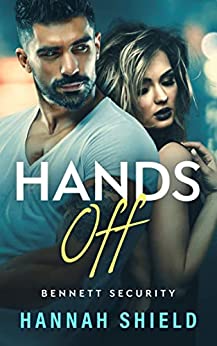 To keep her safe, he has to keep his hands off… But she has other ideas.When Aurora Bennett witnesses a murder by a ruthless Los Angeles crime boss, she ends up stuck in her apartment like she’s the one who committed a crime. Then a sexy new neighbor moves in, and he’s just the sort of bossy, broad-shouldered male that makes her crazy—in more ways than one.Devon Whitestone can’t tell his neighbor Aurora the truth—that he’s actually a personal bodyguard hired by her brother, the owner of Bennett Security. Rule number one: don’t touch.When a dangerous crime syndicate paints a target on Aurora’s back, Devon swoops in to protect her, even though she insists on making his job as difficult as possible. He won't let her out of his sight. But he’s definitely not supposed to like what he sees.This action-packed romantic suspense features a brooding ex-Army stud, his boss’s feisty younger sister, and heart-pounding danger… You won’t want to miss the explosive first book of the Bennett Security series!

A fast-paced romantic thriller with heaps of drama and suspense.The story starts off very tense when Aurora witnesses a murder.There are a few funny and cute scenes where she interacts with Devon as her new neighbour and then when his bodyguard duties take over there is suspense and action. I liked Devon and Aurora as a couple but I thought they went too fast and Aurora was too pushy and desperate for sex.There are quite a few supporting characters and they really gelled well as a big group of family and friends. It felt like I got to know them almost as much as Devon and Aurora. I'm looking forward to reading Max and Lana's story. Max is seriously overprotective and I actually enjoyed that about him. I'm sure Lana is more than capable of standing up to this alpha male so I'm excited to read their story next.Chase and Devon's sister seemed like a good match too and I'm hoping their book won't be too far away.A great start to a new series and one I can't wait to continue reading.
Hands Off will be published on the 3rd of May and can be
pre-orderd at 99p for Amazon Kindle. It can also be read for 'free' with your Kindle Unlimited membership.
Posted by Just Book Talk at 22:06:00