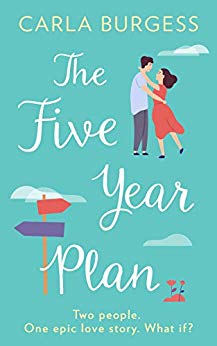 Two people. One epic love story. What if?


Orla is a trainee reporter with a five-year plan: work her way up the career ladder, move to London and secure a job on a big national newspaper. She doesn’t want a boyfriend, he’s only going to hold her back anyway.
Aiden spends his life travelling the world and living in a tent. He knows his goal: to photograph animals and raise awareness of global warming and wildlife conservation. He’s definitely not looking for a relationship past the odd casual hook-up!
So when Orla and Aiden’s lives collide, they do everything to not fall for each other – with the opposite effect. But they stick to their plans, and go their separate ways…
Five years later, they meet again…
If you love Mhairi McFarlane, Jo Watson and Paige Toon, you’ll LOVE Carla Burgess.

OMG! The chemistry between Orla and Aidan in the opening scene is electric.
It's the best opening chapter I've read in a long time but it left me hanging!
The impatience I felt here was real.

We are catapulted into their lives where they meet again for the first time after their five years apart. After reading this scene I was so tempted to skip past the time jump chapters of their youthful, summer romance because I wanted to follow their present day getting back together scenes!

Self control won out.

Their story is quite a slow burn romance but I quite like that as it makes the inevitable reunion that much sweeter in the end.
I really liked Orla and Aidan although Orla did drag her feet a bit and I wouldn't have minded giving her a little nudge to move the story along.

This was a cute, feel good romance and I loved it.

The Five-Year Plan is out on the 20th of March