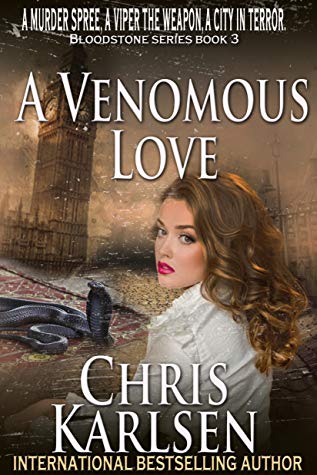 A veteran, Detective Rudyard Bloodstone has fought a brutal battle and witnessed war horrors that haunt his nightmares. Now one of those horrors has followed him home from Africa.

A vicious predator, the Cape cobra, can kill a man in thirty minutes. A suspect using the snake as a weapon in robberies is terrorizing London.

When the crimes escalate into murder, a victim’s daughter, Honoria Underhill, becomes the focus of the killer. After several attempts on her life, Scotland Yard threatens to take over the high profile case. With few leads to follow, Bloodstone and his partner must now fight department politics and catch the killer before Underhill becomes another murder victim.

Having loved the first book in this series I was thrilled to receive a copy of the latest one in the series.

The killer's unique and terrifying modus operandi caught my attention straight away. Just one bite from the Cape cobra is lethal to it's victim so there are plenty of suspenseful moments in this story.
The author lets us know early on in who is behind the attacks and so much of the suspense is developed around the police's attempts to protect Ms. Underhill while we know the killer could take them by surprise and strike at any moment.
While the tension is building up there is a possible romance beginning and there are a few lighthearted and comedic moments as well.
I absolutely loved Honoria Underhill in this book and I really hope she appears again to cause mayhem for the men as the series progresses.

A venomous Love is out now.
Amazon
BookDepository