PREPARE TO BE HOOKED! IT'S LISA JEWELL'S NEW THRILLER. . .LONDON. June 2019: on the foreshore of the river Thames, a bag of bones is discovered. Human bones.DCI Samuel Owusu is called to the scene and quickly sends the bag for forensic examination. The bones are those of a young woman, killed by a blow to the head many years ago.Also inside the bag is a trail of clues which lead DCI Owusu back to a mansion in Chelsea where, nearly thirty years previously, three people lay dead in a kitchen, and a baby waited upstairs for someone to pick her up.The clues point forward too to a brother and sister in Chicago searching for the only person who can make sense of their pasts.Four deaths. An unsolved mystery. A family whose secrets can't stay buried for ever ...

A cleverly crafted, tense, and twisty tale.
Jumping timelines and person points of view adds mystery for the reader puzzling to piece together the events of the past. We are drip-fed information making this story a nail-biting and suspenseful read.
This is the first time I've found myself with all fingers crossed that a killer would get away with it and that 'bad things would happen to bad people.'
I got completely immersed in this book as soon as I opened it. I connected with all of the characters and I just had to find out what happened next. Phin was the only character who was an enigma to me. Even though I was apprehensive about what Henry would do I eagerly followed the breadcrumb trail along with him to unravel the riddle of Phin.
The author ties events and people together very inventively. Rachel's story, in particular, concludes in a very satisfying way as does the police inspector's investigation into Birdie's murder.
This book works brilliantly as a standalone. It's easy to follow and the snappy chapters make it a quick read.
The Family Remains is out now in all formats and from all good bookshops.
Look out for more reviews on the #BlogTour and let us know what you think of Lisa Jewell's new book. 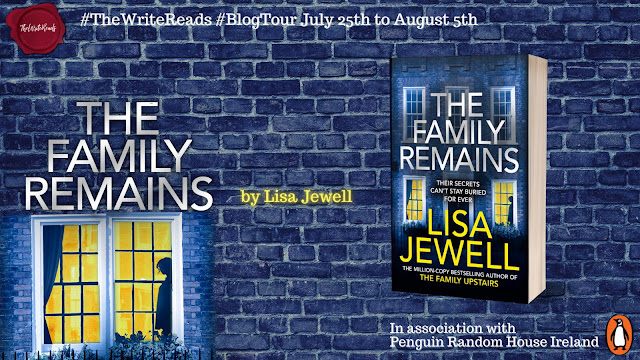 The Love Experiment by Kitty Wilson (2022) He can’t date, she doesn’t date…but what happens when they fall in love?

A heartfelt romance that isn’t afraid to tackle serious issues for fans of Ali Hazelwood, Colleen Hoover and all the best ‘Tiktok made me buy it books’!

Dr Lily Galbraith solves her city’s love problems with wisdom and wit every week on her widely popular Love Doctor podcast, but her own approach to romance centres on one goal: staying single. So when a meet-cute in the sauna brings gorgeous Jay Hooper into her life she knows she needs to run the other way.

Having just agreed to a bet with his sister that he’ll stop dating and searching for ‘Mrs Right’ for at least six months, Jay tries to ignore the attraction he feels for Lily, which is only intensified when they find themselves working together.

He can’t date, and she doesn’t date…but then again, rules are made to be broken, aren’t they?

T/w: mention of past violence and abuse, PCOS

Whip smart dialogue, a lively ensemble cast who are a total scream and sizzling chemistry between Jay and Lily make this a memorable and entertaining rom-com. Paired with a glass of wine it's the perfect summer read.
I laughed my way through this book even though it touches on some heavier themes such as coercive control.
I really loved the humour, especially in the interactions between Jay and Lily in their earlier scenes together. They have the best cute-meet ever!
Jay's sister, the girls at the youth centre and Lily's friends make up the rest of the humour and I just loved their side stories.
I couldn't wait to see Jay and Lily finally get their HEA.  I loved how well Jay handled events as they unfolded. He's so sweet. He doesn't react badly to Lily ever and he gives her space to figure herself out. We need more Jays in real life.
The Love Experiment is out now Amazon
Posted by Just Book Talk at 20:28:00 No comments:

Anything Could Happen by Lucy Diamond (2021) 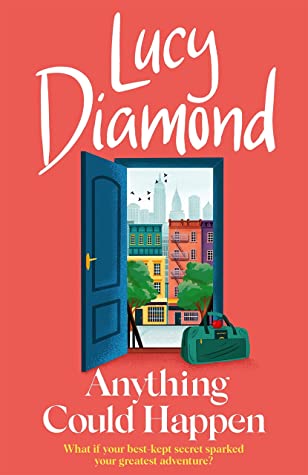 A chance encounter in New York City. A great love story on the cusp of beginning. And then he was gone.For Lara and her daughter Eliza, it has always been just the two of them. But when Eliza turns eighteen and wants to connect with her father, Lara is forced to admit a secret that she has been keeping from her daughter her whole life.Eliza needs answers - and so does Lara. Their journey to the truth will take them on a road trip across England and eventually to New York, where it all began. Dreams might have been broken and opportunities missed, but there are still surprises in store...Anything Could Happen is a warm, wise, funny and uplifting novel about love, second chances and the unexpected and extraordinary paths life can take us down.

I was not expecting this book to leave me happily weepy by the end but it did.
The first quarter of the book shows how much a complicated mess life can be and how decisions you make in your youth can have long-lasting consequences and not always for the best. I wasn't sure I was going to like Lara because of how she deceived her former husband and lied to Eliza, about her real dad, Ben. I could just feel everybody's awkwardness about the situation and their heartache at how life had turned out for them and all because of missed opportunities, poor decisions and bad luck. As I got to know the characters through Ben and Eliza's new relationship I could see how Lara made the decisions she had. I couldn't help but hope along with Eliza that a spark would still be there between Lara and Ben.
The story takes place over a year and we can see how Lara, Eliza, Ben and even Ben's wife Kristen adapt to their new situations and make difficult decisions about the way they want their lives to be and who they want to be with.
I loved the fact that the three went back to New York as a family. Their naturalness as a family unit and the bond they were building was heartwarming to see. There was definite chemistry between Lara and Ben but their love story was not rushed. Ben's story with Kristen needed to be resolved before I could be happy for him and Lara to admit their long-suppressed feelings for each other. When everything eventually fell into place it was magic. The orchard was a nice touch at the end and gave the sense of fate, that some things are just meant to be no matter how long it takes.
Posted by Just Book Talk at 15:59:00 No comments:

An Honest Life : A Gritty Irish Family Drama Based On The Backdrop Of A Criminal Element 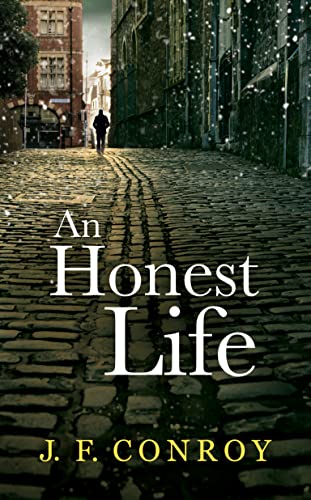 Dublin city has taken care of itself for years, governed by two criminal gangs who intertwine in each route without the need to be involved in each other's company, until now.
A story of two families who are at opposite sides of the spectrum in their quality of life. The criminal element connects them within the city they live in. The only difference between them is that one man controls everything and everyone around him and the other man's life is governed by the poor choices he makes affecting everyone around him.
Declan Hennessey was an adopted child who grew up in the back streets of Dublin. His mother, Geraldine, raised him on her own after his father died unexpectedly. He is a tough, ruthless villain and an intimidating character. A younger woman, Kathleen, saw passed his exterior persona and the pair soon bonded. Within a year they married and went on to have one son, Kieran. Rising through the ranks, Declan eventually took control running the north side of Dublin's crime scene owning a pub and a hardware store. A new upcoming smarter pair of brothers (the Finnertys) aim to intimidate and take control of his long acquired assets and schemes as Declan struggles to maintain power over his territory. A rival gang (the O'Driscolls) in the south of the city have acquired the brother's services and naively gave them too much control too soon before they are caught duping the head of the outfit.
Martin Lynch is a casual criminal of sorts who gets caught up in danger because of his excesses. He struggles to keep his head above water with bad life choices leading to debts, lack of work and money. His charm has only got him so far in life as his drinking and gambling have only added to the strain on his family's day to day life. His wife Bridget juggles to keep the fabric of the family together as long shift patterns drain her emotionally. They are coping with the factor that their teenage daughter, Sinead, is overcoming pivotal stages of cancer.
Their son, Shane, grew up with Kieran and the pair get caught up in the struggle between their fathers. Kathleen and Bridget are the best of friends, and their strong bond plays out throughout the story. Declan and Martin despise each other and share common traits that unknowingly connect them throughout the story. Underneath all their conflicts, they will both do anything to protect their families. Their journey takes a torrid turn which sees the fabric of their family structure torn apart in different scenarios. The story delves into the powerful emotions of the main characters, no matter how strong each individual thinks they are. It brings home the importance that at the heart of everyone's underlying happiness, it is family. Significant themes of loyalty, love, strength and friendship prevail in the characters. These traits take them down a path to their lowest point of reckoning until they break and redeem themselves, showing their true potential in a person they never thought they could be.

An Honest Life is essentially a family drama set within the criminal world of Dublin. The scene setting and character development were brilliantly done. From the descriptions in the opening pages, it was apparent that the author had done extensive research. Dublin is clearly recognisable and the turn of phrase and expressions used by the characters were unmistakably and authentically Irish.I was surprised at the amount of humour in this book. I was expecting it to be darker as it's billed as a gritty crime drama but I found myself more often than not laughing at the antics of Martin and the funny quips he comes out with. Some of his funniest moments were in his interactions with his daughter, Sinéad.It's difficult not to like Martin even though you'd like to shake a little bit of sense into him. It took me a bit longer to warm up to Declan but he proved his worth in the end and in a way I didn't see coming.The crime element came more to the fore in the last quarter of the book and it heightened the sense of tension and suspense making the book impossible to put down.Despite tragedy, violence and jealousy An Honest Life had me laughing, crying and laughing some more as the story concluded in a very uplifting and heartwarming way.
My only concern about this book, at first sight, was the convoluted blurb. I prefer a short succinct outline of the main premise and I felt that this one was too long with too much information.
An Honest Life is out now.
Posted by Just Book Talk at 13:53:00 No comments: