Beyond All Dreams by Elizabeth Camden Published by Bethany House Publishing

A beautiful blend of history and romance. I took my time reading this novel as it was such an interesting read I didn't want to miss any detail. The settings and characters were so richly developed I found myself completely immersed in their story, time period and could have quite happily stayed there a little bit longer.

I liked that congressman Luke Callaghan was not simply a dashing hero to the rescue, but was instead a flawed individual who recognised his own weaknesses and struggled with his inner demons. And ultimately, in the end, having the strength of character to be the man he'd always striven to be.
Anna O' Brien, slow to anger and quick to forgive, is his polar opposite and exactly what he needs. A working friendship soon blossoms into respect and love for each other.

The political intrigue of the time period fascinated me and it added to the tension in the story. The very real inequalities of being a woman in a man's world also heaped added pressure on Anna and highlighted her strong, admirable character.

Both have their own agendas to pursue on Capitol Hill and Anna's obsession with uncovering the truth about her father's death has far reaching consequences, the likes of which has the potential to destroy their fledgling romance and thrust the country into war. 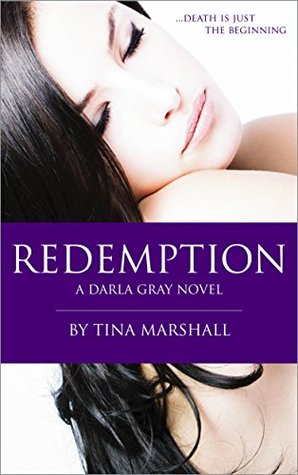 'Darla, a women destroyed by loss and despair seeks to put an end to her life with all its pain and suffering, but instead of the welcome relief of death she finds herself cast into Redemption; a world where myths and legends are a reality. Demons, Vampires, Lycans and all other creatures of lore not only exist but have walked among us since the dawn of time. But something darker is in pursuit of Darla. Can the enigmatic Quinn save her from a preordained fate, or will his own tortured past stop him from claiming the woman who has set his senses on fire? Time is running out and for Darla, caught in the centre of a battle between good and evil, the cost of failure could bring about the destruction of Heaven itself.'

An absolutely brilliant read. From start to finish 'Redemption' had me thoroughly entertained. I really sympathised with the characters and was rooting for their success. The poignant scenes had me in tears but the humour throughout the novel kept me smiling. There was a high level of adventure and suspense, which I love, as well as a little bit of romance.

I am thrilled to have found this series and can't wait for more.

The Kindle edition of Redemption is currently free to download.
Posted by Just Book Talk at 19:09:00 No comments:

The Certainty of Doing Evil by Colin Falconer 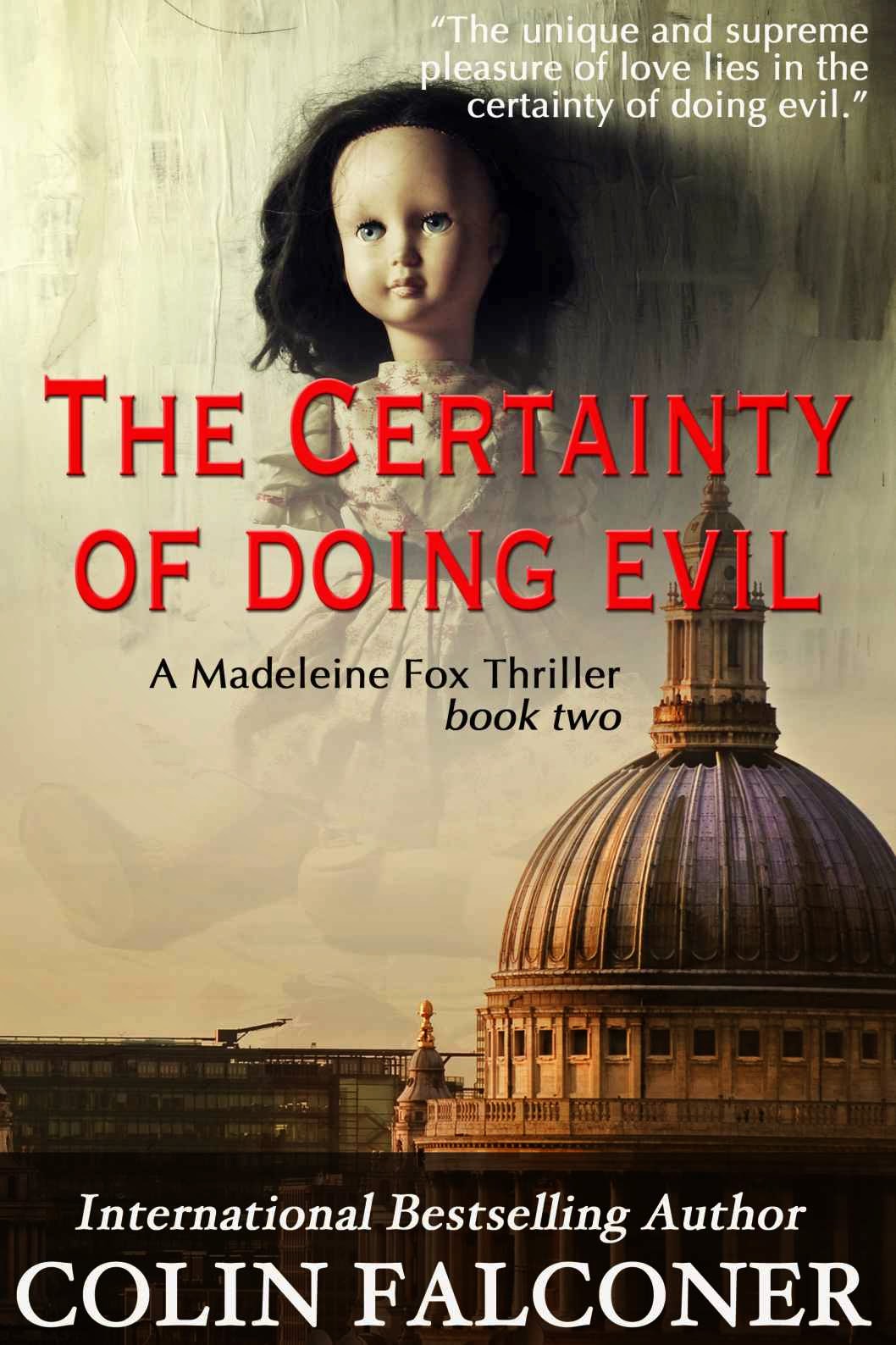 ‘The unique and supreme pleasure of love lies in the certainty of doing evil’
She is naked. She is spreadeagled on a torture rack in a basement. She is dead. Well, this is what happens when you don’t vet your clients properly. Madeleine Fox supposes she shouldn’t yawn over a naked, dead woman but it is four in the morning and she’s tired. Perhaps she has seen too many dead bodies. These toms should really be more careful, especially if they’re going to specialise in BDSM. It’s not all 50 Shades of Grey and shopping. It’s seems like just another murder, and they find their prime suspect within twenty four hours. He insists he is innocent - but then they all do, don’t they? Fox is the only detective in the Area Major Incident Team who believes him. She decides to dig a little deeper. By the time the case file is closed everyone from the Commissioner down to Fox herself wish she hadn’t. Day by day they all come undone; the detectives, the victims and the one man who never meant for so many people to get hurt. You can peel away as many layers as you want; but never think you know everything about any human heart. Tough, funny and shocking, THE CERTAINTY OF DOING EVIL IN HELL adds to the legend of DI Madeleine Fox. But will it is also be the end of her?'

This novel is a real page turner. There is nothing tedious or drawn out. The chapters are nice and short and they make the novel flow quickly. I liked how the author gives us the perspective of some of the characters without complicating things and without making it predictable.

I also loved all the dark humour in the novel, as it prevented it turning into, what could have been, quite a bleak tale.

I loved the main character Madeleine Fox and will definitely be looking out for more detective work from her in the future.
Posted by Just Book Talk at 20:19:00 No comments: 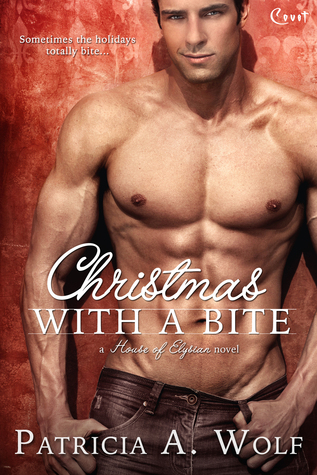 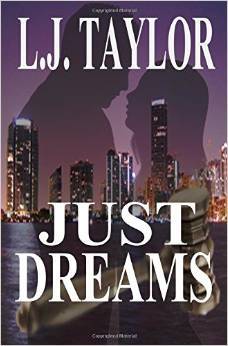 'Sparks fly when attorney Kathy Brooks agrees to represent novelist Charles Morgan, Jr. in a high-profile suit against a powerful government defense contractor. But when Charles’ hidden agenda threatens to expose the government’s dirty little secrets, what started out as the case of a lifetime could cost Kathy her heart, her career and even her life. Charles doesn’t just want to win the lawsuit. He wants to destroy the company responsible for his wife’s death. His enemies, however, will stop at nothing to make the case go away – and that includes blackmail, kidnapping, and murder. '

A fast paced legal thriller with a little bit of romance mixed in. The characters are like-able and well developed.
Very little drama takes place inside the courtroom. Instead, Kathy has to fight to get the case to trial at the same time as dealing with all kinds of machinations by opposing council, both legal and illegal. One thing she can't fight though is her attraction to her client. Charles, however is not against breaking a few rules himself which only complicates matters. Kathy's career is put in jeopardy when she is caught in a compromising situation. The government contractor will stop at nothing to quash the case and before long Kathy's hard work is spiraling apart a midst blackmail and dead witnesses. However, the duo refuse to give in and they use all resources available to them to find a winning conclusion.  As the contractor gets desperate there is a rush against time to save lives in a suspense filled ending.

An impressive debut novel. Immensely enjoyable, I liked this book a lot. There was so much action it was difficult to put it down. The characters were great. I particularly enjoyed the supporting characters, especially Kathy's sister.  I await her story in eager anticipation. 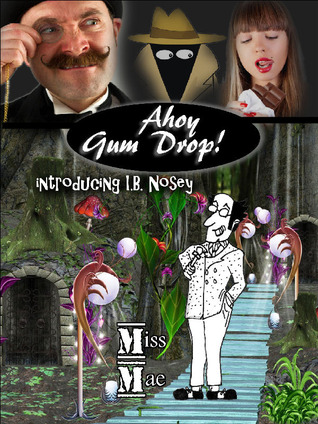 Product description, Goodreads
'What if -? What if you no longer could find your favorite chocolate in your candy store? What if the store informed you they may never get in a new shipment? Imagine the horror, the chaos, the wailing and gnashing of teeth, not to mention your impending foul-mood. And then imagine this scenario happening on a worldwide scale! What can be the problem? What can be the solution? It’s up to the brave (?) adventurer, Sir O. Yuri Wiseguy-eh and his mishaps from Gum Drop Island to boldly (double ?) go where no one has gone before. Yes, they must enter the realm of the forbidding and humuggity shrouded land called Moldy Corners. The next question, dear readers, is - can what happens in Moldy Corners affect you?'


A quirky, fun story, jam packed with humorous scenes and fantastic characters. I loved the imagery and the play on words. This type of story was a complete departure from my usual reading habits but its light hearted appeal means it can be enjoyed by anyone, young and old alike. Younger readers might appreciate the little recap the narrator relates at the beginning of the chapters. The audio version is brilliant. The inhabitants of the island really come to life and it adds an extra layer of enjoyment.

www.audible.co.uk lists this book for ages 5-7 but it is also suitable for older children and the young at heart!
Print version available The Book Depository
Posted by Just Book Talk at 15:01:00 7 comments: