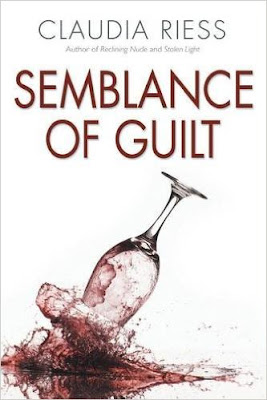 Publisher's Information
Ellen Davis’s husband left her for another woman. Post-divorce, she’s trying to reassert her independence and lands a job as a reporter for her local newspaper. One of her assignments is covering weekly items on the police blotter, which is how she gets to know Lieutenant Pete Sakura—a handsome, witty Japanese- American Ellen is drawn to immediately. Another of Ellen’s assignments is interviewing for the paper’s “Around The Town” column, and in this capacity, she meets Graham and Sophia Clarke, newcomers to the community. He’s an administrator at Columbia; she’s his beautiful Greek wife. Ellen and Sophia become fast friends, so it comes as a great shock when Sophia ends up dead. Sophia Clarke is found murdered, and to all appearances, Ellen is the last person to have seen her alive. When Ellen’s fingerprints are found on the murder weapon, she’s arrested, and evidence steadily mounts against her. Ellen takes matters into her own hands as her romantic feelings for Pete intensify. Closing this case could either save Ellen or lead to her destruction.

A fast read with an intricately woven plot. I couldn't put it down.

The characters were interesting especially Graham and Sophia. I really enjoyed the mystery because I couldn't figure out how the culprit managed to do it without leaving any evidence of their involvement. The odds were so overwhelmingly stacked against Ellen that I couldn't see how she was going to prove her innocence. I had a good idea who the killer was but I couldn't figure out how they did it. The mystery had me completely stumped until the very end when everything unravelled. The twist in the tale came as a complete surprise.

The story takes a new direction after the murder takes place and and it plays out mostly as a courtroom drama. Therefore there is less action and suspense than I would normally like but it remained enjoyable nonetheless.

Pete and Ellen made a good team but I felt that the romance between the pair was a bit rushed. They hadn't been on any official dates but within a short space of time the pair were expressing their love for one another. It just didn't really ring true and I would have liked to see their friendship develop more slowly, over the length of the book or even slower over a series, rather than forcing them together too quickly.
I liked the characters though, and I would be quick to read more if Pete and Ellen's crime solving adventures were to be made into a series.

Thank you to the author who provided a copy in exchange for my honest review.
Posted by Just Book Talk at 20:58:00 No comments:

The Last Days of Summer by Vanessa Ronan (2016) 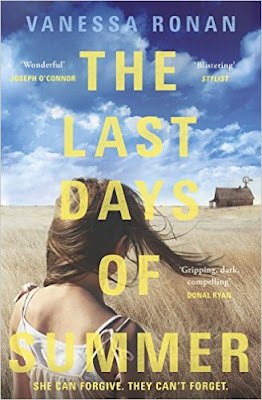 She can forgive. They can't forget.
After ten years in the Huntsville State Penitentiary, Jasper Curtis returns home to live with his sister and her two daughters. Lizzie does not know who she's letting into her home: the brother she grew up loving or the monster he became.
Teenage Katie distrusts this strange man in their home but eleven-year-old Joanne is just intrigued by her new uncle.
Jasper says he's all done with trouble, but in a forgotten prairie town that knows no forgiveness, it does not take long for trouble to arrive at their door ...

It takes time to read this book and fully absorb the atmosphere of menace that builds right from the first page. The tension builds in the same way as the story develops; slow and simmering until it finally reaches its boiling point when the story concludes in a whirling swirl of violence and destruction.
As I was reading The Last Days of Summer I couldn't help but be reminded of Harper Lee's 'To Kill a Mocking Bird,' or 'Go Set A Watchman.' The story is set in small town America, descriptions of the landscape and the people are vivid in detail and there is an undercurrent of menace running through each line of the story. I was just waiting for something bad to happen. The towns people couldn't and wouldn't forgive or forget what Jasper had done and they weren't happy that he was back in town. In their eyes he is a loose cannon and they are going to stop him before he explodes.
However Jasper isn't alone. He has a sister and two nieces one of whom he is very fond of. Their vulnerability in this hostile environment is palpable and it's only a matter of time before someone gets hurt.
I was expecting this book to be a dark read and so I wasn't caught unaware when things started to heat up. I was hoping that Lizzie and her two daughters would escape the worst of it. The ending would have been a lot darker had Jasper not acted in the way he did but what I really loved about the ending was Rose's final act of vengeance.

A compelling and beautifully written story.

Thank you to Penguin Random House Ireland for the review copy.
Posted by Just Book Talk at 14:32:00 No comments: