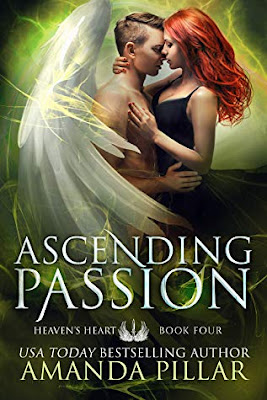 Is the truth really worth dying for?Becoming a bodyguard isn’t exactly on Yael’s list of dream jobs. In fact, he’s much better at killing than he is at saving people. But when the most powerful witch Crone in the Americas asks him for a favor, he isn’t left with much of a choice. And the worst part? His new client doesn’t believe in magic and she’s human.The love of Rowan Broome’s life is dead; killed in a horrific car accident. Rowan seeks escape, only for it to be offered in the opportunity of a lifetime: become an excavation director for an archaeological dig in Egypt. Unbeknownst to her, her boss isn’t the magnanimous Luke Starre she believes, but Lucifer, ruler of Hell.Burdened with a bodyguard she doesn’t want, but desperate to forget her past, Rowan is drawn closer and closer to Lucifer. Can she survive the twisted web he’s woven, or will Yael have to save her from herself?Heaven's Heart series - In ProgressDeadly PassionBenevolent PassionWinged PassionAscending Passion

This series is a firm favourite of mine. Yael and Rowan's story is a fun read with plenty of twists. Despite there is a little bit of sadness at the start of the novel as Rowan grieves her fiancé, humour really fills the pages along with the intrigue and suspense involved in searching for another piece of Heaven's Heart.
I loved that their treasure hunt took them to Egypt and to an active archaeology site. I like Egyptology but I really love reading about the early digs there and the superstitions that developed. It made the curses and spells that Yael had to deal with sound very realistic! It's very easy to get pulled into the magic in this story.

I recommend reading this series in order.