* Previously published as The Arsonist.

A year after the infamous arsonist Nero was found dead in one of his latest fires, journalist Darcy Sampson receives a tip that the body found at the scene wasn't Nero at all. Determined to solve the case, Darcy heads to her small hometown in Virginia to track Michael Gannon, an arsonist investigator who refuses to believe that Nero is dead.

But when a new series of fires in the area have a remarkable resemblance to the arsonist's previous work, Darcy and Gannon are in a race against time to put a stop to Nero once and for all.

But Nero is ready and waiting for them, and he intends on teaching both Gannon and
Darcy one last, fatal lesson.

Playing With Fire is fast-paced and suspense-filled. The author did an excellent job with the two main characters, Darcy and Gannon. Both of them have detailed and eventful backgrounds which means that the reader comes to care about them from the moment they appear on the page. The duo have great chemistry from the get-go and it was fun to watch the beginning of their romance. Both have their own insecurities which made them more relatable. Darcy in particular had more than one problem to deal with and I was completely sucked into all the family drama that she had to cope with along with trying to investigate the Nero fires.
I enjoyed the action and suspense and it ratcheted up a lot as the story progressed. The suspense and sense of danger the fires created made the story quite exciting and one I couldn't put down. The story concluded in a way I wasn't expecting but loved. It left me with a tingly, nervous feeling imagining what might happen next!
Find out what my fellow bloggers think of Playing With Fire by checking out their stops on the blog tour. 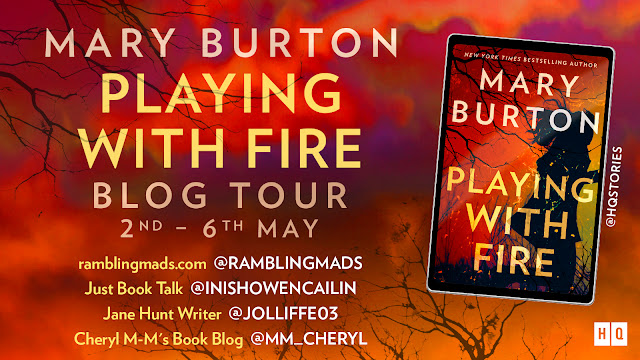