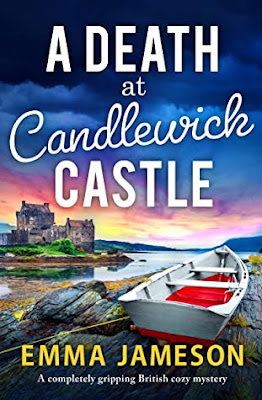 Off the coast of Cornwall, the Isles of Scilly are a balmy haven with never-ending beaches and aqua-blue sea. But unbeknown to the happy tourists and cheerful locals, someone is about to commit a terrible crime…Librarian Jemima Jago’s summer is off to a delightful start. By day she works on cataloguing the oldest library in Cornwall, and by night she can be found stargazing with her old friend Pauley Gwynn.When the body of Hermie Castleberry is found on the beach at Candlewick Castle, Jem’s perfect summer turns into a nightmare. Hermie was new to the islands, could he really have made an enemy so soon? Jem doesn’t want to get involved, but when somebody close to her is arrested for the murder, she springs into action to clear their name.Jem soon discovers that Hermie had already ruffled a few feathers in St Morwenna and she’s worried that the police seem to have overlooked other suspects. Could Jimmy the scorned salesman or Seth the shifty scout leader have killed Hermie? As she hunts down more leads, she butts heads with the handsome Sergeant Hackman. If their relationship is purely professional, why does Jem blush every time she catches his eye?The discovery of another victim, this time in the island’s picturesque harbor, leaves Jem reeling. Can she catch the coldblooded killer and stop another life being taken before the sun sets on summer in St Morwenna?A charming cozy mystery from the New York Times and USA Today bestselling author Emma Jameson. Fans of M.C. Beaton, Faith Martin and Agatha Christie will adore A Death at Candlewick Castle.

Jem's second murder mystery is equally as good as the first one. The characters are well established by now and they all seem like old friends to me. I enjoyed the originality of the setting and the mystery. Jem finds herself needing to investigate a murder to help an old friend prove his innocence. Sergent Hackman is reluctant to involve Jem but he ultimately can't stop her from sticking her nose in. I like their interactions. Their relationship is in its very early stages which leaves an opening for an old crush to make his feelings for Jem clear. The other man isn't as likeable and I'm sure it won't take Jem long to be firmly on #TeamHack. I love a good love triangle told well and I'm looking forward to the tension it will create, the little jealousies and awkwardness that will come about as things develop.
The mystery concludes well with plenty of suspense and drama.
I listened to the audio version of this book and thoroughly enjoyed the narration. Book 3 is already on my playlist for listening to soon.