** A sizzling stand-alone, irresistible, opposites attract, grumpy/sunshine novel with twists you did not see coming.**

Alisha McQueen is a confident woman who has always stood on her own two red stilettos. Even now, suffering from nightmares, paranoia, and aversion to men’s touch following a brutal attack, she doesn’t accept anyone’s help. But when the man who attacked her finds her home and begins stalking her, it sends her into a spiral of despair. Now what she needs is security, and the one person able to help her with that is none other than the arrogant bulldozer, Cole Walker.

Cole is a man who's attached to his drama-free lifestyle; that's the way he has managed to succeed in business while keeping the ghosts from his past at bay. But, although their personalities clash beyond reason, he's been attracted to Alisha from the start. So, when she offers to help him with his newly discovered teenage daughter in exchange for the safety of a second apartment he owns, he can't say no.

As they grow closer, realizing that they get along better than they originally thought, the spark between these two headstrong people burns to unbearable heights. However, the secrets and demons they keep buried deep inside force them to face new challenges. Will they and their blossoming relationship be stronger than the real evil trying to tear them apart?

Irresistible Attraction hits all the right notes- a steamy, suspense-filled romance with lots of family drama and a bunch of friends you can't help but care about. This is quite a long read with numerous sex scenes but the pages practically turn themselves as the story is brilliant and addictive.Cole and Alisha have instant chemistry and it's impossible not to want them to be together. Both characters have flaws and inner demons. Cole is guilt-ridden over the death of his father and is quick-tempered at the beginning of the book. The relationship he has with his daughter is so heartwarming and it is one of my favourite things about the novel. Cole's character mellows as he becomes used to being a father and after he opens up about his past to Alisha he is much happier.I loved the suspense in the book although there were times that I forgot all about the stalker amidst the family drama. However, the stalker didn't hold back once he had Alisha and Cole where he wanted them and those scenes were very dramatic. I wasn't sure how bad things were going to get for Alisha and I was on tenterhooks for her.Cola and Alisha's friends were cute and added humour to the story with their direct questions and meddling. I am itching to find out what happens with Amanda and Brian and I'm really hoping there's some other man drama so that she can torment him with jealousy and regret because it seems like he deserves a taste of it. I can't wait to dive into more of the series. 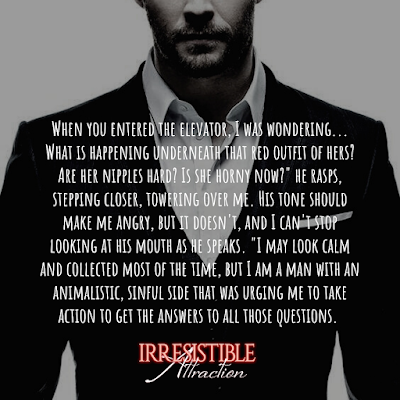 Irresistible Attraction is out now.