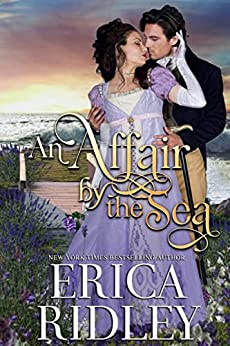 What happens when a wallflower's extremely make-believe fake suitor appears in the flesh just in time to ruin all her spinsterly plans? Find out in AN AFFAIR BY THE SEA!

Orphaned pianist Allegra Brown is a poor relation with nothing much to recommend her, save a minuscule dowry and a very big imagination. She has spent the past several years as governess to her younger cousins, who are now ready for their come out—and want Allegra to marry, too. Specifically, they eagerly await the return of Allegra’s dashing, handsome, swashbuckling, conveniently absent and secretly fictional fiancé, the dread pirate Captain L’Amour.

The only place Mr. John Sharp strikes fear is in the courtroom, where his neat, ordered mind is renowned for winning every case he presents. John loves predictability and longs to be a chef. Unfortunately, every time he puts on an apron, the entire kitchen catches fire. Much like passion burning between him and a certain wildly unpredictable spinster, who seems to have confused him for a dashing, exciting pirate. By fulfilling her fantasies, can his dreams come true…together?

This second book in the series is easily read as a standalone. The story is lighthearted and charming. I loved the fact that John took on the persona of the cartoonish Captain L'Amour without hesitation. Allegra and John both have dreams they wish to fulfil and it was great fun watching them do this and flirt with each other at the same time. This was a quick read and a lot of fun. I'm sure the rest of the series will be just as delightful.