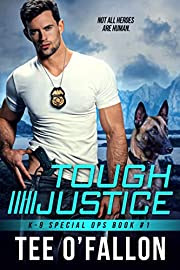 It should have been a routine investigation. Instead, DEA K-9 agent Adam "Deck" Decker watches in horror as one Denver hospital seems to be Ground Zero for overdoses of a new drug. Now Deck can only hope a certain icy, green-eyed ER doctor will help him and his canine partner track down the deadly source.Dr. Tori Sampson has her reasons for not trusting federal agents, especially ones working for the DEA. But the rash of overdoses—including a heartbreaking case involving a teen—is alarmingly high. And the new opioid is not only extremely dangerous, it defies all the usual medical treatments. So Tori has a choice: work with the big, brawny, and annoyingly hot DEA agent...or watch more innocent people die.  Tori's the only person who can help Deck break the case, and they'll need to trust each other, no matter how high the tension and attraction sizzling between them runs. But with every question answered, they realize there's something more behind these typical teen overdoses. There's a pattern here, and a pattern can only suggest one thing. There's a killer on the loose.

An action-packed and tense thriller. This is a quick read. The plot moves along at a speedy pace. The world-building is done very well. We instantly get a connection to Deck, the DEA agent whose sister died from an overdose at sixteen. Dr Tori's family has had a bad relationship with the DEA ever since her dad went to prison for six months for violating laws to do with his pharmacy practice even though it was for altruistic reasons. Both protagonists meet in the opening scene where Dr Tori is tasked with saving an agent's life.

There is a good mix of action and drama at crime scenes and it highlights some of the dangers that officers and the K-9 units face. I would say that the author planted too many clues as to who the drug lord was and I had it figured out a quarter way through the book.

The romance was a nice secondary story. The two didn't like each other on sight so it was interesting to watch them mellow towards one another.

A great start to the series.