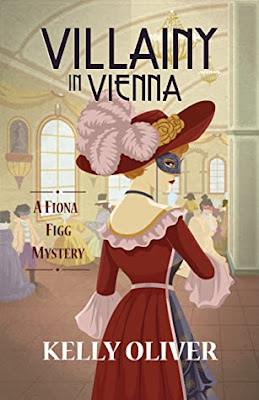 Downton Abbey meets Agatha Christie in this entertaining historical mystery.1917 Vienna.File clerk turned British agent Fiona Figg is more comfortable wearing a fake mustache than a ballgown.When a royal ball ends with a royal body in the middle of the dancefloor, Fiona trades her dancing slippers for practical oxfords and sets out to investigate.As she tracks her nemesis, the Black Panther, from Vienna to the Austrian countryside, a hunting accident makes her rethink her loyalties.
Can Fiona prevent the Black Panther from striking again, save her own skin, and find a decent cup of tea, all before the enemy's emperor realizes she's a spy?

This is my first time reading any of the Fiona Figg mysteries and  I enjoyed this book as a standalone. I probably would have enjoyed it even more if I had read the previous books especially as Fiona's relationships with the men in her life is great fun to read.

Fredrick Fredricks is the enemy you love to hate and I couldn't help but find him very charming and humorous, especially where Fiona is concerned. Archie didn't appear much in this book but when he did he was a charming addition too. It will be interesting to see what happens with them in New York in the next adventure.

There is more than one mystery to solve in Vienna and I found it a little confusing at times. The dognapping wasn't a particularly interesting case nor was the missing notebook but they got resolved quite quickly in the end. The actual mystery of who the spy was to prevent another murder was much better but side-swept somewhat with the other cases. I did like that the characters were based on real people and real events.