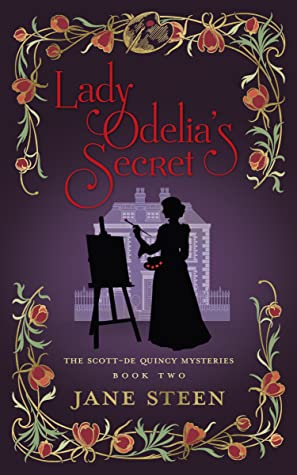 Do you ever really know your family?In the 1880s a sixth daughter learns not to ask for much, even if she’s the daughter of an earl. Even if she married the richest man in her corner of Sussex. Even if she’s now a widow with a splendid Georgian mansion.Lady Helena Whitcombe is still trying to adjust to widowhood and reconcile her family loyalties with her desires when her artist sister Odelia makes a startling suggestion. Why not make her mark on the house that’s now all hers, by commissioning a magnificent work of art from one of London’s most celebrated painters?Lady Odelia invites Helena into the seductive world of medieval fantasies and fairy tales she has inhabited since Helena was a child. But when a shocking series of events exposes the destructive reality of a great artist’s unusual lifestyle, Helena and her lady’s maid Guttridge are called on to help—or is it to interfere?Looming danger, the risk of scandal, and competing loyalties force Helena to re-evaluate her relationship with the sister she’s always loved the most.What is Lady Odelia’s secret? Find out in this gripping continuation of the Scott-De Quincy Mysteries, a story that blends mystery and historical detail with Downton Abbey-style saga as the truths about Helena’s aristocratic family unfold. Read it now before the secret gets out!

This is a series that I feel can only continue to get better with each book as the secrets of Helena's family get slowly revealed through her investigations. Her friend and love interest, Fortier, also has a few secrets of his own.

This is not a lighthearted romp with a bit of mystery. The overall feel of the book is quite dark and the story is slow-moving but still very entertaining and difficult to put down. Helena is a widow mourning her late husband, she is still coming to terms with the revelations about her mother in the previous book, Fortier's father is dying and Odelia is being targeted by a malicious and dangerous person whilst she is having an affair with a married man. There is plenty of drama but Helena manoeuvres through it skillfully. She is very loyal to her family and no matter how much she disapproves of Odelia's lifestyle she holds steadfast in her love and faithfulness.

Most of the story centres around Odelia's relationship with Geraint, the artist and the rivalry and disharmony this causes with all the other women in Geraint's life, including his wife. Helena's family also rally around each other when scandal breaks out and I liked seeing their family unity. It will be interesting to see what skeletons the other family members have in their closets as the series unfolds.