A Lady of Refinement by Linda Weaver Clarke 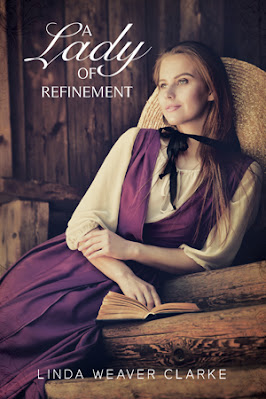 Some immigrants learned about America and its opportunities from the newspaper while others heard about it from traveling missionaries. Many were seeking relief from political and religious persecution but others were just following their hearts. They didn’t know what the future would bring to them. Frances Davies, my great grandmother, was one of them.

She left her beloved homeland of Wales to live in America, the land of opportunity. Frances had attended a private school and received an education that set her apart from other young women. She was referred to as a “lady of refinement.”

Her Aunt Susan didn’t want her to leave and begged her to stay in Wales. She said that Frances would inherit her fortune if she stayed but Frances stood firm and unyielding and wanted to join her brother who had immigrated to America a few years earlier. No matter how hard Aunt Susan tried, she could not influence her niece’s decision.

A Lady of Refinement is a historical romance set in 1844. Reading is Serenity’s favorite pastime, where she can go on one adventure after another. She wonders if anyone can measure up to the heroes in her books. But the adventures soon become real after arriving in America.

When Jonathan meets Serenity, an educated and courageous woman from Wales, he becomes intrigued with her and wonders how he can win her heart. Her brother gives him some advice, but Jonathan begins to question his wisdom. Should he trust his friend or is he leading him astray?

Louise Pledge, a reviewer, wrote: “How I enjoy finding a book that will not let me put it down until I'm done!  This was the case with A Lady of Refinement.  Linda Weaver Clarke used a true story of her ancestor’s as a base, and it rang familiar to me, as my ancestors also migrated to America from England during the same time period. The main character, Serenity, is the refined lady, and it was such a delight when she bested a few arrogant males.  My favorite character, however, was Jonathan, who was very taken with Serenity.  Time will tell if he is successful at capturing her attention.”

After arriving in America, Serenity found that many an adult could not read or write, so she set to work teaching an evening class especially for adults. Each night she teaches her students how to write their names so they wouldn’t have to put an X for their signature. When Jonathan joins her class, her world takes a new turn, one she didn’t expect. What was her reaction?

Author Gail Pallotta wrote: “At first she sees him as a quiet man, but when she witnesses some of his heroic actions she thinks of Ivanhoe, a character she admires in a book. Even though she’s drawn to Jonathan, she has a rule that won’t allow her to date a student, and she’s sticking to it. Jonathan’s infatuation leads him to try many approaches to get to know Serenity better, even to the extent of following her brother William’s sometimes bad advice.”

How did Jonathan react to William’s bad advice? There are some comical scenes in this story that will make you laugh out loud. Gail went on to say: “I enjoyed this sweet love story, especially Jonathan trying desperately to win over Serenity, while she hesitates to get to know him. Based on true events of the authors’ ancestors, the book takes the reader back to a gentler time when men were more chivalrous and a woman like Serenity more difficult to win over.”

This book or eBook is available on Amazon.