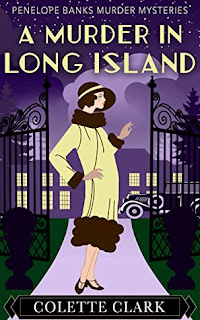 A death in a locked room and a house full of suspects…New York, 1925Penelope “Pen” Banks has a knack for puzzling things out and the uncanny ability to remember everything she sees. Two talents that have helped her make ends meet, playing cards in clubs and speakeasies. Now, they might just help her discover the true cause of death for a dear old family friend.Agnes Sterling has been found dead in her Long Island mansion. The official cause of death is ruled a suicide. After all, she was found in her locked bedroom with both the bottle of poison and a final handwritten note on the bed next to her.Penelope is certain Agnes Sterling’s death was not by her own hand. She’s been summoned to Long Island for the reading of the will along with the other beneficiaries. While there, she plans on doing a little sleuthing to discover what really happened to Agnes.The surprising terms of the will and a secret letter have Pen all the more certain that foul play was at hand.A Murder in Long Island is the first book in the Penelope Banks Murder Mysteries set in 1920s New York, with a spirited heroine, witty banter, and twists and turns that will leave you guessing. Perfect for readers who enjoy the feel of a cozy mystery with the excitement and daring of Prohibition and the Jazz Age.
⭐⭐⭐⭐⭐
A fantastic start to brand new series.
Penelope is a very endearing character. She is clever, resourceful and self-sufficient. She relies on herself to get by in the world and she's not against bending the rules or circumventing the law in order to do so.
This first book in the series introduces her as riches to rags character who soon finds herself flush in cash again after inheriting a fortune. The murder mystery and the other mysterious goings-on are very entertaining and I enjoyed watching Penelope puzzle it all out. The suspects were all believable. I was pretty sure who was involved in the art forgery from the beginning but I needed Penelope to figure out exactly how it was all done.
I loved the interactions between Penelope and the Detective. Although he appears later in the novel, sparks fly between them right from the onset and it injects a lot of humour and a certain amount of frisson. I can see how the pair will make a great duo in solving crime for the rest of the series. I can't wait.
Posted by Just Book Talk at 12:54:00