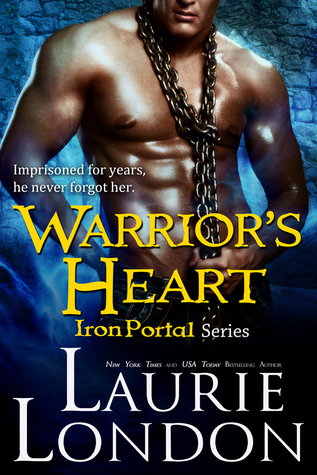 Imprisoned for years, he never forgot her.
Zara Kane is leading a double life. By day, she’s a respected antiquities expert, working at a library, but by night, she’s a thief, stealing back artifacts that belong to her homeland. When she learns that a man she once loved—who abandoned her when she needed him the most—has been wrongly imprisoned, she uses her para-ability Talent to orchestrate a daring escape.

Vince Crawford is damaged man. After years of torture and suffering, the beautiful boy with the sparkling brown eyes is gone, replaced by a jaded ex-con hellbent on revenge. He isn’t afraid of anything, but when the woman he’s never stopped loving and the son he never knew he had are threatened by a ruthless enemy who knows they’re his greatest weakness, Vince will stop at nothing to keep them safe…even if it costs him his life.

Although this is the third 'Iron Portal' book, it was my first dip into the series. I got the gist of it fairly quickly and the characters were all explained in good detail so it was very easy to get into the book and enjoy it. The words on the page flowed so well that before I knew it I was half way through. There is plenty of action and steamy romance to keep you entertained for hours.
Vince and Zara made a good couple and it was satisfying to see their little family reunited after they were so cruelly ripped apart in their youth.
I enjoyed this book immensely. I'm looking forward to reading subsequent titles but in the meantime I'll read the earlier books in the series to find out more about the supporting characters featured in Warrior's Heart.