Love on the Lake series by Amy Gamet 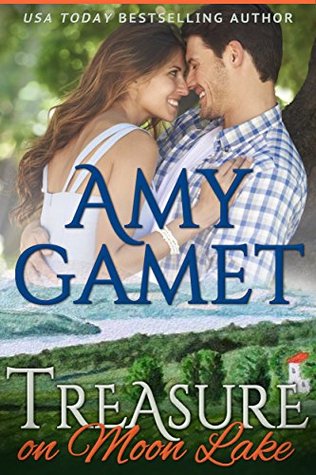 
True love is hiding where you least expect to find it...
Jewellery designer Tori Henderson’s first year in business was far more expensive than she could have imagined. Faced with closing the doors of Tori’s Treasures, she sinks her last dollar into one final promotion—a widely publicized treasure hunt for a chest of fine, handmade jewellery that could drum up enough business to get her back in the black... or kill her shop once and for all.
The last thing she needs is her mother's announcement that she's preparing to marry Edward Trainor, the father of Tori’s long ago summer crush, Gabe - a man who regularly makes his way into Tori's dreams some ten years later.
Corporate tycoon Jed Trainor has no intention of attending his estranged father’s wedding, and he certainly doesn’t need to see his half-brother Gabe after the other man put the moves on Jed's one-time fiancée. But with business problems looming, Jed needs time to think, and the small town of Moon Lake seems like the perfect place to hide away while he figures out how to save his empire. The last thing he needs is the distraction of a beautiful woman who thinks she’s in love with his idiot half-brother.
Tori is determined to win Gabe’s heart, but Jed has other plans. When they learn Gabe is bringing a date to the wedding, Jed offers to bring Tori himself, knowing any woman on his arm is sure to be on Gabe’s radar. But his ploy for her attention just may blow up in his face. Can Jed prove to Tori he’s the Trainor brother she really belongs with?'


Treasure on Moon Lake is a quick romantic read. The love triangle element and the jealousies that ensued were well written and entertaining to read. The story flowed well and I got absorbed in it pretty quickly. I just wasn't too sure how donating $10,000 worth of jewellery for a treasure hunt was going to save a failing business but I glossed over that little detail. The story is a real feel good romance with a happy ending and I immediately started the second in the series after finishing it.

Treasure on Moon Lake is recommended to any fans of contemporary romance and it currently FREE to download on Amazon Kindle.

Melanie Addario's been in emotional limbo since her boyfriend disappeared two years ago. Now a secret admirer is coaxing her well-protected heart out of hiding, making her question if she should wait for a man who may never come back, or if it's finally time to open herself to new possibilities.
Just as she's beginning to make progress, a self-proclaimed fortune-teller throws Melanie for a loop when the other woman suggests her admirer is none other than her long-lost boyfriend, Army Lieutenant Greg Mora. Will the man she once loved really come back into her life, or is the fortune-teller way off base?

A man who must fight for his future...

Rafael Delacruz never meant to become a secret admirer. When he left the first gift on Melanie's doorstep, he had every intention of finally asking out the blonde bombshell who'd attracted his attention years before. But the very next day, she was asking him for a job, and there was no way he was going to send her away. Now he's Melanie's boss, an arrangement that has him firmly pressed between his desires and responsibility.

When the owner of Crescent Moon puts the vineyard on the market for a small fortune, Moon Lake outsider Rafael is forced to find the backing of an investor to buy the business he's come to love. But someone is trying to sabotage operations at the vineyard, putting his plans for Crescent Moon and his hopes for a relationship with Melanie in jeopardy.


As Rafael works to solve the mystery of the vineyard saboteur, loyalties will be tested as shadows from the past rise up to be counted, forcing both Melanie and Rafael to choose between that which is given freely and that which can only be hoped for. Will they be able to separate friends from enemies before it's too late, or will they lose the vineyard--and each other--forever?'

The second book in the series didn't disappoint. The story is character driven and you get a real sense of who the characters are and how they've reached where they are in their lives. We also get a little update on Bonnie and Edward from book 1. I also enjoyed Melanie's character in book one and was looking forward to her getting a Happily Ever After. The only thing missing in this book was the subtle humour that was more evident in Treasure on Moon Lake.
An quick and entertaining read.
I will look forward to reading #3 'Return to Moon Lake' when it publishes later this month.