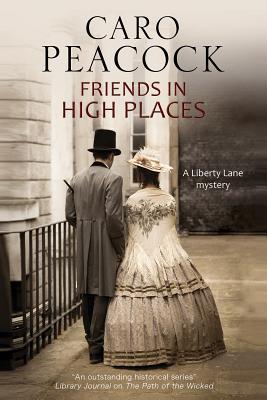 Featuring private investigator Liberty Lane.
September, 1840. Novelist and patron of the arts Lady Blessington has hired Liberty Lane to escort a French gentleman to The Hague. For he has in his possession important papers that will assist in the forthcoming trial of Prince Louis Napoleon Bonaparte, the late emperor s nephew who has failed in an attempt to seize power in France. Plans for the undercover expedition are disrupted however when a body is found hanging in the attic at Gore House, Lady Blessington s Kensington mansion. Uncovering evidence that the murder was meticulously prepared for and planned well in advance, Liberty determines to track down the killer. But she is about to find herself plunged into a highly dangerous game involving blackmail, treachery, espionage and cold-blooded murder.
This is the seventh in the series. I didn't realise this when I started it or I would have begun at #1  as I hate reading a series out of order. However, not having read the earlier books didn't diminish my enjoyment at all. I felt that I got to know the characters quite well and pretty quickly. The mystery itself was intriguing and the murder that occurs took me by surprise. As did the way in which the murder was executed; very devious and chilling.  This novel has everything I would expect of the genre; mystery, murder, political intrigue and spies as well as a romantic interest, although the romantic interest took a back burner in this installment.

I enjoyed the character of Liberty Lane and the group of people she surrounds herself with. I would recommend this book to anyone who enjoys historical crime novels. This is one of my favourite genres so I would really like to read this series from the beginning.  'A Foreign Affair' is #1 and appears to have also been published under the title 'Death at Dawn.'