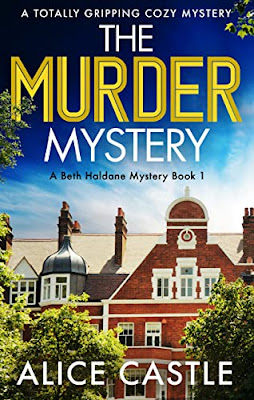 Meet Dulwich Village’s most daring resident, Beth Haldane. Mother to a sweet little boy, owner of a sulky cat… and solver of mysteries?It’s a crisp spring day in Dulwich Village when Beth arrives at the intricate iron gates of Wyatt’s School for her new job as the historian’s assistant. But on a lunchtime stroll admiring the pristine grounds of this five-hundred-year-old institution, Beth is shocked to stumble over the body of her new boss Alan Jenkins: spectacles askew, his mustard-yellow tweed jacket covered in blood.Gossip about outsider Beth spreads like wildfire. The parents in the playground are all whispering: did she bump him off to get her hands on his job?Desperate to clear her name and protect her own little boy, Beth turns her research skills to hunt for the true killer. She soon discovers Alan rubbed his fellow teachers up the wrong way… could the handsome headmaster be involved? Why did Beth see a flash of the school receptionist’s bright pink jumper at the murder scene? And what is the groundskeeper hiding?When Beth returns from her sleuthing to find her office in disarray and documents missing from the archives, it’s clear this prestigious school hides a deadly secret. But with parents and teachers panicking that the long-protected reputation of Wyatt’s is under threat, will Beth herself be in the murderer’s sights before the school bell rings?Wander down the cobbled streets of Dulwich, where nothing is as perfect as it seems! Fans of Agatha Christie, The Thursday Murder Club and Faith Martin won’t be able to put down this deliciously gripping mystery.This book was previously published as Death in Dulwich.

The Murder Mystery is a quick, easy read. The character development, Beth's inner musings, and acerbic observations during the school run make it so enjoyable. Beth is a lovely person and very relatable. We get to know her personal history as a grieving, single mother and as a reader, I couldn't help but get emotionally invested in her life.Having the school as a setting for murder was a little bit different and luckily most of the staff and pupils were away on a field trip which narrowed down the pool of suspects somewhat. I was impressed with how well the author wrote about education and experiences and attitudes towards special needs and learning support. It was all very realistic and true to life.As Beth continued to investigate the murder it became clearer who the culprit was most likely to be but I had to wait to the end to find out if I was right.Thankfully sparse in detail, the heavier topic of child abuse also came into the frame as the investigation gathered pace. I really enjoyed DI York. It was easy to see that he was good at his job and was trying to keep a professional distance from Beth even though it was obvious that they would make good friends. The scene where he helped call her cat home was cute. I'm looking forward to seeing these two develop their relationship as the series progresses.I spent a lovely relaxing day reading this book and I recommend it wholeheartedly.
The Murder Mystery will be released on the 22nd of August.
Amazon
Posted by Just Book Talk at 22:02:00