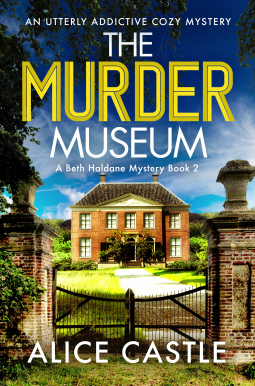 Caring mother, school historian, and amateur sleuth Beth Haldane loves to while away an afternoon in the Museum of Art. But will she be next in the frame… for murder?

Beth Haldane is gazing at enchanting paintings of the rolling English countryside when her daydream is rudely interrupted: by the discovery of a teenage girl unconscious on a marble bench.

Shocked, Beth realises this is no snoozing schoolchild. Someone dastardly has carefully crossed the girls’ hands across her white dress, as if she’s in a painting herself. And the girl’s discarded red backpack found in a corner of the museum is totally empty. Is someone suspicious hiding evidence? And who would want to harm this innocent soul?

With poor Sophia in hospital, and the parents of Dulwich Village in uproar that their little darlings might be next, Beth pesters police for updates. And with her keen eye for detail and research skills, Beth is perfectly placed to do some sleuthing of her own… but why are Sophia’s gaggle of friends so close-lipped? Has some typical teenage drama taken a dark turn?

But her questions are ruffling feathers at every turn. With Sophia’s life hanging by a thread, can Beth find her attacker before it’s too late – and before the finger points at Beth herself?

This book was previously published as The Girl in the Gallery.

This second book in the series starts off with a very creepy but artistic sort of crime scene where Beth finds a lifeless girl posed in a way that resembles some of her favourite paintings at the museum. The mystery of who the girl is and what happened to her sparks a complicated investigation that seems to hit dead end after dead end. There is a very real sense of urgency as the victims, in this case, are young teens.
DI Harry York, against his better judgement, is tempted once again to involve Beth in the investigation as she has a logical mind and the uncanny ability to be in the wrong place at the right time. I enjoy their interactions and their inner musings about one another. I really like Harry and found it sweet that he thought of Beth as a princess. It also made me laugh that he felt the need to include her in the investigation only to get very cross with her for being in harm's way when events develop out of her control. He really gets on Beth's nerves at times but they tend to get over any squabbles very quickly.
I love the social commentary in these books. The teachers and their attitudes towards certain students and their parents are very true to life. The report card comments made me smile as did the perils of the parent cliques at the school gates.
Parents and their relationships with their children are also keenly observed by the author as is social media and the alarming impact it has on today's youth.
The Murder Museum will be released on the 22nd of August along with the rest of the series.
Posted by Just Book Talk at 18:07:00