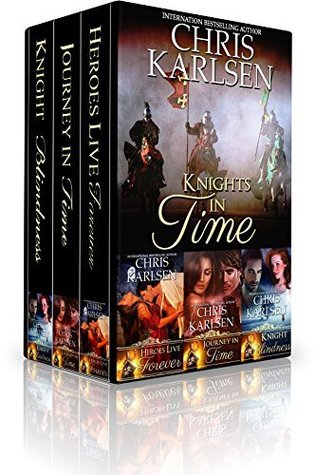 HEROES LIVE FOREVER
Elinor Hawthorne has inherited a house haunted by two medieval knights, Basil Manneville and Guy Guiscard. Basil is literally the knight of her dreams. She never expected to “meet” a ghost face to face let alone fall in love with one. Living the normal life together that they’d want is impossible unless fate intervenes.
A lifetime later fate does intervene. Basil, still in love with Elinor, is told her spirit lives on in a young woman. He is given another chance at life to find her.

JOURNEY IN TIME
The budding romance between London attorney, Shakira Constantine, and her client, Alex Lancaster is put to the test when the couple finds themselves torn through time back to the medieval world. It’s a world Alex has a strong connection to, a connection that will cost him his life unless they can find a way to return to this time. Without him, Shakira is condemned to live in a dangerous medieval world alone.
Together they’ll struggle to discover a way back to the modern world while dealing with the political and social intrigues of 14th Century England. The intrigues of that world all too often work against their efforts to get home.

KNIGHT BLINDNESS
Stephen Palmer, a wounded medieval knight finds himself torn through time from the battlefield to the modern and alien world.
Seriously injured, he now must make his way in a world he has no context for and no knowledge about.
Esme Crippen is hired as his tutor. Love is something he does understand and as the two fall into love, they both must overcome the fact the world thinks him mad with his time-travel talk, including Esme.

Basil and Guy's story begins with 'Heroes Live Forever.' These two knights and loyal friends are loveable rogues, sweet and funny. The fact that they are ghosts only adds to their charm. They are both fond of and protective of Elinor, especially Basil, who provides some very amusing episodes when he makes use of his ghostly skills in helping her and by scaring off a romantic rival.
There is a lot of humour, charm and an old worldly romantic feel to the story thanks to Basil's 14th century chivalric code. However, there is also a depth to Basil and Elinor's story that is touching and poignant. I had to stop reading it in public at one stage because tears were threatening.
It is a long, rocky road to their happy ending but well worth the journey.

'Journey In Time' sees Guy getting his happy ever after with a second chance at life and love. His spirit has been given a new human form, in the guise of Alex Lancaster, a descendant of Guy's and a successful music producer. He meets and falls in love with Shakira, a lawyer, but before they have time to seriously consider a proper relationship, they are swept back in time to 14th century England. Back in his old time, Alex quickly has to shed his carefree future persona to that of a knight of old. With the trials of political intrigue and war on the horizon, Alex has the weight of the world on his shoulders. He also has to protect Shakira and get back to the present day before he is sent off to battle and dies all over again.
Guy is a great romantic hero. He is protective of Shakira, passionate, funny, quick thinking and proves to be a good friend on more than one occasion.
I loved the time travel element in this book. There was plenty of action, back stabbing and intrigue that you would associate with this time. With a healthy dose of romance in the mix, 'Journey in Time' proved to be one story I couldn't put down and didn't want to end.

'Knight Blindness' gives us Stephen Palmer's story, a knight whom we met in 'Journey In Time.' A twist of fate has seen him propelled from a 14th century French battlefield to the present day. He is suffering from injuries sustained in the battle and has lost his eyesight. He is alone and confused but luckily with the help of his friends, Basil and Guy, he learns to adjust. With the help of Esme, a tutor, he learns how to cope with both his blindness and carve out a life for himself in this new time.
I liked Stephen's character and his sense of determination but he didn't quite measure up to Guy and Basil. He was sweet at the beginning when he was getting to know Esme and falling in love but after a misunderstanding he was quite unforgiving and callous. I didn't like the way he treated Esme who did far too much running after him for my liking. However, it all worked out in the end and I enjoyed their story.
Stephen didn't travel through time alone, however. The French Knight, Marchand, who struck him down in battle also came through the time portal along with their two war horses. His presence and personal agenda added another layer of suspense to the story.

I loved this series as it ticked so many boxes for me, romance, time travel, ghost story and medieval romance. Whether you are a fan of any of these genres or not, either way, 'Knights In Time' won't fail to entertain.

Currently priced at £2.63 on Kindle AmazonUK