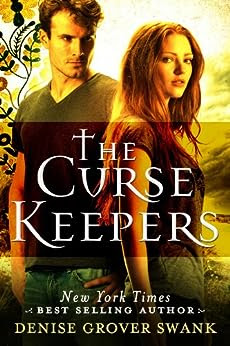 'The wall between our world and that of vengeful spirits has protected humanity for more than 400 years. It’s about to come crashing down.
Ellie Lancaster has lived her whole life by the site of the mysterious Lost Colony of Roanoke, the North Carolina settlement that vanished without a trace around 1590. Only the descendants of the two men who banished the spirits of an enemy tribe from the material realm know what really happened to the colony. Ellie is one of those descendants—a Curse Keeper. Her father took pains to teach her what he knew of the curse and the responsibilities of its guardians. He taught her that if the two Curse Keepers ever meet, the curse will be lifted, the gate will open, and the raging Native American spirits will be unleashed to seek their revenge.
Despite her father’s seriousness, Ellie has always taken the legend for a harmless fairy tale. Until she meets the darkly handsome, but downright infuriating, Collin Dailey and realizes everything she was told is true. For when they meet, it’s like the air is sucked from the room. Collin’s presence is electrifying… and it’s not just attraction Ellie feels, but the inexorable pull toward her destiny. The prophecy is real, and now Ellie and Collin must battle supernatural forces and their loathing—and passion—for each other to set things right.
The Curse Keepers are all that stand between the world and its destruction.' amazon.com

Ellie and Collin are curse keepers who break an ancient curse when they meet for the first time and touch. Consequently, the gates of Hell are opened and only they can close it and send all the spirits back. We follow them on their quest as they face off adversaries, both human and nefarious gods, while they retrieve lost family artifacts needed in performing the ancient 'gate closing' ceremony.
The native American lore was very interesting and linked well with the supernatural forces in the story. In fact, the supernatural beings were the best part and I would have liked to see them take more of a lead role as they added a bit of bite to the story.
Ellie was a likeable enough character and we get an understanding of who she is and what motivates her but Collin is a bit of an enigma. It was difficult to sympathise with him when he had no story to justify him being such an ass.
Posted by Just Book Talk at 20:03:00