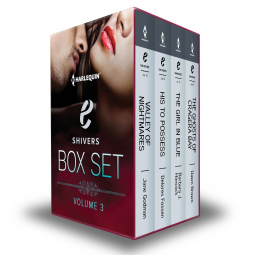 
A superb collection of gothic historical and contemporary romance. There was enough spookiness in this collection to make me sleep with a light on!

Valley of Nightmares by Jane Godman
Highly recommended.
A classic gothic historical romance complete with the crumbling mansion, a brooding hero and the obligatory governess. It sits apart from others in the genre as it is set in 1938 with the threat of Nazi fascism and the supernatural adding an extra twist. Loved it.
His to Possess by Delores Fossen
Oliva and Lucien have never met but share erotic dreams that are not their own. When they do meet it is with the realisation that they are being possessed/haunted by two lovers who were murdered decades earlier. They need to find the killer before they become the next victims. Entertaining.
The Girl in Blue by Barbara J. Hancock
Trinity Chadwick once brought Samuel Creed back from the brink of death. Now he watches over her. Trinity, however, is plagued by misfortune. She can see malevolent spirits haunting her town, causing accidents and even death. She herself has been haunted from a young age by a girl in blue. The ghost sets fires and causes the death of Trinity's friend. Trinity must delve into the dark past of her town to find the answers and lay this particular ghost to rest.  Spooky!
The Ghosts of Cragera Bay by Dawn Brown
Declan James inherits an estate in Wales along with its aging staff but all is not as it seems. Declan finds it difficult  to sell the estate as it was the site of multiple murders. In addition to this the spirits of these murder victims are trapped and can't move on. Declan is haunted by malevolent shadow people and a woman who was burned to death.  Dr. Carly Evans is a parapsychologist who insists on investigating this ghostly estate to prove her theory that evil is attracted to the site and that the murders added fuel to its power. With three people arrested for the murders it comes as a shock when Carly's assistant goes missing. Can Carly and Declan find the real killer and put an end to the evil once and for all? Creepy!
Posted by Just Book Talk at 21:49:00