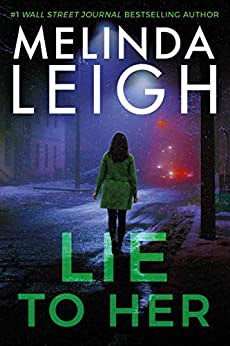 Lies from the heart lead to a dangerously intimate case for Sheriff Bree Taggert in #1 Amazon Charts and Wall Street Journal bestselling author Melinda Leigh’s novel of revenge and fatal deceptions.When a digital marketer is found murdered in his backyard—hands bound and face smothered by plastic wrap—Sheriff Bree Taggert and criminal investigator Matt Flynn respond to the call. Their investigation focuses on the man’s dating-app profile and the word liar carved into his forehead.One day later, the killer strikes again.Both victims are players in the internet dating scene. In their wake, they leave a trail of hurt—and angry—women. But Bree and Matt aren’t convinced the motive is as simple as it appears. Everyone they interview seems to be lying or hiding something.As the list of suspects grows, the killer’s rage escalates, and he leaves a personal and deadly warning for Bree. They must act fast. Because someone Bree loves is targeted as the next to die.

A fast-paced mystery that kept me guessing. I thought I had a good idea of what to expect from this suspenseful thriller but the author teased me with twists that surprised me. The tension levels and suspense are high, particularly in the book's final quarter when the lives of characters I didn't want anything to happen to were in danger.

I have to admit I didn't have an awful lot of sympathy for the male victims at the beginning of the book and it wouldn't have been too much for me if the author had decided to do away with a few more like them. Although, maybe resorting to murder is slightly overstepping the mark but hey, that's the joy of fiction.

Bree and Matt are much more professional in their outlook and waste no time looking for evidence, motive and suspects. And there are plenty to choose from. The victims have left a string of angry women behind who feel used and discarded so it's no surprise that they are some of many on the suspect list.

I have read a few of the books in this series but each one is easily enjoyed as a standalone. If you like mysteries and thrillers with more emphasis on solving crime than romance then you will enjoy this series. There is a romantic element but it's in the background and very low-key.

Lie To Her is the 6th book in the Bree Taggert series and will be published on the 17th of January.