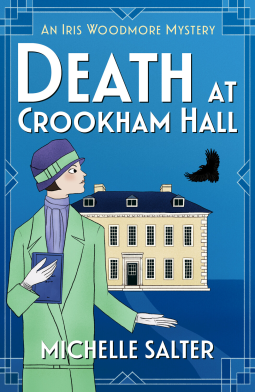 The start of a gripping 1920s cozy mystery series from Michelle Salter for 2023.

A fatal jump. A missing suffragette. An inexplicable murder.London, 1920. For the first time ever, two women are competing against each other to become an MP. Reporter Iris Woodmore has a big story on her hands when she accompanies one of the candidates to the House of Commons. But it’s a place that holds painful memories. In 1914, her mother died there when she fell into the River Thames during a daring suffragette protest. Then, in the shadow of Big Ben, a waterman tells Iris her mother didn’t fall – she jumped.Iris discovers that the suffragette with her mother that fateful day has been missing for six years, mysteriously disappearing just after the protest. Desperate to know the truth behind the fatal jump, Iris’s investigation leads her to Crookham Hall, an ancestral home where secrets and lies lead to murder…The first book in the Iris Woodmore cozy crime series.Previously published as The Suffragette’s Daughter.
🌟🌟🌟🌟🌟
I love mysteries set in the 1920's and was delighted to start this series from the beginning.
Once Iris begins researching the candidates for election she stumbles upon more than one mystery associated with Crookham Hall. Simultaneously, the question of what really happened to her mother on the day she died is raised and Iris is determined to get to the bottom of it. Not even a missing maid and murder can put Iris off the case. She worries away at all the loose threads until the truth finally comes to light.
Death at Crookham Hall pushes the boundaries of what makes a traditional cozy as there are some darker and shocking twists to the story that I didn't see coming. I loved that it managed to shock me and take me by surprise.
The court case was another good twist as we don't normally get to see past the arrest in mystery novels.
I enjoyed the historical detail, the link to the suffragettes and how women were treated by the law and society at that time.
One of my favourite characters was Percy who was very entertaining and funny. He injected a lot of humour into the book and I hope he pops up as a recurring character in the rest of the series.
I'm looking forward to reading Book 2: Murder At Waldenmere Lake when it's published in March.
Death at Crookham Hall is out now Amazon
Posted by Just Book Talk at 07:30:00