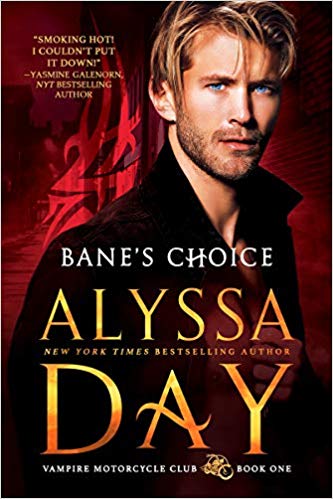 Vampires are back for a reason! Meet the sexy, dark hero Bane in New York Times bestselling author Alyssa Day's smokin'-hot romance.Bane lost his humanity ages ago. Nothing is more important than protecting his Vampire Motorcycle Club from the death magic invading his territory. The most ancient of vampires, he seeks cold, unfeeling, bloody vengeance...until a frustratingly sexy human doctor is thrust into his path. She tempts Bane to distraction. And distraction is deadly in his world.Buttoned-up and meticulous Dr. Ryan St. Cloud never thought she’d find herself in the mix of a motorcycle club, let alone one full of terrifyingly badass vampires. Or how intrigued she is by their dark and enigmatic leader, who seems balanced on the knife’s edge of killing her...or claiming her.But Bane’s choice is harder than it seems because when that danger hits too close to home, he’s forced to choose between her life and everyone else’s.

Initially, I felt that this book read like it was a spin-off to another series and I was expected to be familiar with Bane, his people, and the dangers he faced. Maybe a prequel novella could be an option in the future.
I was, however, quickly distracted by all the action in and in Bane's attraction to Dr Ryan St. Cloud. Aspects of Bane's past was explained as the story developed and I got to know him and his sister Meara a little bit better. I really liked Ryan's character. She wasn't afraid of the paranormal world she found herself thrust into and she didn't hesitate to fight on their behalf. There was good banter between her and Bane and quite a lot of humour. I'm looking forward to seeing what happens with Edge and Meara and I'm also intrigued by what the future holds for Hunter. How will he be different from the other vampires? Maybe the motorcycle club will feature more in the rest of the series as well.
Bane's Choice is out now.
Amazon
Posted by Just Book Talk at 14:48:00