The Virgin of the Wind Rose: A Christopher Columbus Mystery-Thriller by Glen Craney (2014) 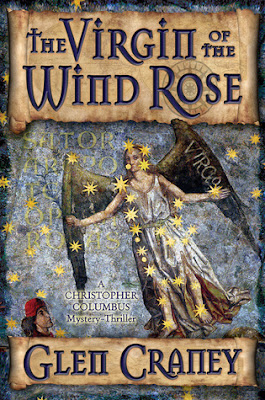 While investigating the murder of an American missionary in Ethiopia, rookie State Department lawyer Jaqueline Quartermane becomes obsessed with a magical word square found inside an underground church guarding the tomb of the biblical Adam.Drawn into a web of esoteric intrigue, she and a roguish antiquities thief named Elymas must race an elusive and taunting mastermind to find the one relic needed to resurrect Solomon's Temple. A trail of cabalistic clues leads them to the catacombs of Rome, the crypt below Chartres Cathedral, a Masonic shaft in Nova Scotia, a Portuguese shipwreck off Sumatra, and the caverns under the Temple Mount in Jerusalem.Intertwined with this modern mystery-thriller, a parallel duel is waged:The year is 1452. One of the most secretive societies in history, Portugal's Order of Christ, is led by a reclusive visionary, Prince Henry the Navigator. He and his medieval version of NASA merged with the CIA scheme to foil their archenemies, the Inquisitor Torquemada and Queen Isabella of Castile, who plan to bring back Christ for the Last Judgement by ridding the world of Jews, heretics, and unbelievers.

Separated by half a millennium, two conspiracies to usher in the Tribulations promised by the Book of Revelation dovetail in this fast-paced thriller to expose the world's most explosive secret: The true identity of Christopher Columbus and the explorer's connection to those now trying to spark the End of Days.

A riveting mystery-thriller choc full of suspense, intrigue and adventure.
I found the dual stories to be equally enthralling and I was impressed by how the author wove the two stories together and linked them across two time periods.
The amount of research that went into this book is astounding.  The historical aspects are cleverly written in a clever way and without reading like an academic text. The author manages to weave fact, fiction and conspiracy theories together in a fun and entertaining way.
I got completely immersed in both the historical and contemporary story lines.
The contemporary story is full of adventure and very fast paced.  Jacqueline travels to different countries as she solves codes, follows clues whilst dodging attempts on her life. She also gets a little help from Elymas, an antiquities thief. I liked Elymas more than Jacqueline. I wouldn't have minded if she was simply a person of faith but she came across as too much of a religious nut for my liking and I didn't really connect with her in any emotional way. Elymas was more of an attractive character. He is mysterious and swoops in at opportune moments. His sense of humour and constant teasing of Jacqueline made him a very likeable character.
I really enjoyed the flirtation and lighthearted banter than went on between the pair. It lightened the mood of a story full of historical research and complicated codes. Their fast paced adventure kept me turning the pages and entertained right to the end.
There were plenty of twists and turns and the closing chapters also brought a few shocks and surprises.

This was a great read. Thanks to the author for providing me with a review copy.