Beneath the Coyote Hills by William Luvaas (2016) 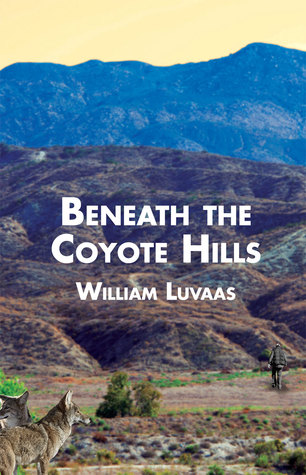 Beneath The Coyote Hills explores the influence of choice and chance in our lives. Do we control our own destiny or is it dictated in part by mysterious forces beyond our control?
Tommy Aristophanos is a luckless man, a homeless freegan, fiction writer, and epileptic, who is haunted by grotesque "spell visions" and by his abusive father who returns, quite literally, from the dead. When Tommy’s fictional creation, wealthy and successful V.C. Hoffstatter, emerges from pages of the novel Tommy is writing to harass him–repossess his home and fire him from his job, leaving him homeless–plucky Tommy fights back. Hoffstatter believes that we author our own destiny, while Tommy’s many reverses and his ailment teach him that we control far less than we imagine. He endures attacks by vigilante thugs, marauding coyotes, and by a criminal organ transplant ring in Kosovo that steals one of his kidneys. In the book’s final narrative twist, we are left wondering who is the true Pygmalion–Tommy or Hoffstatter?

Beneath the Coyote Hills was a book I just had to read in one day. It is a fast paced, unique and unusual story; one I refused to put it down lest I lose sight of the 'real' world Tommy inhabits and the fictional one he creates as the line between the blurs.
The story jumps in time from Tommy's childhood to his life in the present day as well as dipping into the fictional world of V.C. Hoffstatter.
It sounds like it might be confusing for the reader however, impressively, it is presented in such a logical way that it all makes sense, although it does make you think!
The twist at the end took me by surprise and I found myself pondering the story and its characters long after I had finished it.
The merging of the two worlds made compelling reading and I was fascinated by the whole idea of people's existences being dependant upon the stroke of a pen and the whim of the author.