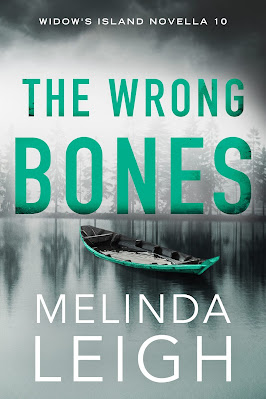 A frantic chase to catch a grave robber reveals a startling discovery in this tenth installment of the Widow’s Island novella series by Wall Street Journal bestselling author Melinda Leigh.Deputy Tessa Black spots a man disturbing a grave in the local cemetery and gives chase. But when Tessa catches him, she learns that the ghoulish trespasser wasn’t robbing graves; he was burying a box of bones.With the help of her fiancé, park ranger Logan Wilde, Tessa discovers that the remains belong to a missing teenager from a nearby island. After the girl disappeared nine months ago, police labelled her a runaway. Now, though, it’s clear the teenager was murdered.When the only witness is an uncooperative teenager, Tessa and Logan must find the killer before the boy becomes the next target.

What a great idea; a thriller series with each book of novella length. Not only is the mystery exciting and tense but each book can be read in one evening so it makes perfect reading for anyone who feels they don't have time to read. This is the tenth in the series but easily be read as a standalone.

In this instalment, Tessa starts the ball rolling by disturbing and giving chase to a person burying a box of bones in the graveyard. This quickly escalates into a murder investigation and there are a couple of suspects once the identity of the murder victim is revealed. Logan, the park ranger partners up with her to find the killer.

We get a sense of the realities of living on a small island where there are few resources and help can be far away when something goes wrong.

This was a quick read with high drama and a satisfying conclusion.

The Wrong Bones is out now.