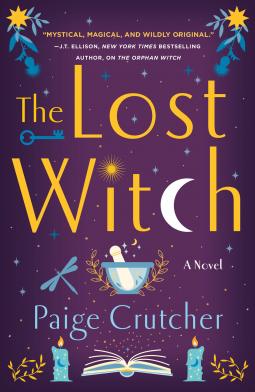 Publisher's information
Paige Crutcher, author of the “mystical, magical, and wildly original”* The Orphan Witch, weaves a spellbinding tale of contemporary fantasy, romance, and Irish mythology as a woman torn out of time faces a dangerous coven, otherworldly creatures, and a seductive demi-god to save the souls of a cursed island in The Lost Witch.1922. The town of Evermore off the coast of Ireland is under the protection of a Goddess. She has bestowed power upon village healer Brigid Heron to ensure the heart of magic within the Lough of Brionglóid—the lake of dreams—remains untouched. For the witches of Knight want to absorb its powerful energies and release the Damned from the Otherworld. Brigid has devoted her whole life to being Evermore’s guardian, immersing herself in witchcraft, and sacrificing her own dreams. Until Luc Knightly, a trickster god with his own claim on the lough, offers Brigid her heart’s desire in exchange for betraying her Goddess’s trust.2022. A century later, Evermore is under siege. The witches of Knight wield chaos magic, opening the rift between the island and the Otherworld wider every day. Beings born from folklore nightmares prey on the villagers, consuming their very humanity. Ophelia Gallagher, Brigid’s descendent, and her fellow witch Finola McEntire do their best to keep the monsters and mayhem at bay.Brigid awakens in this world with no memory of how she traveled into the future, and why Evermore has been cursed. To seal the lough and stop the witches of Knight, she must work with Ophelia and Finola to help her remember the events of a hundred years ago. But the knowledge she seeks lies with Luc Knightly himself--mysterious, handsome, and powerful--and the one who once upon a time granted Brigid her dearest wish—a daughter.To save Evermore, Brigid may have to lose her daughter—again…

I liked this book but I found it difficult to get into. We are told events rather than witnessing the characters experiencing things going on around them. The plot is enjoyable but slow, however by 70% of the way in the suspense, drama and action increased tenfold and it was impossible to put the book down.

Luc and Brigid were working together better as she had her memories back and I liked them as a couple. I just felt that the author spent too much time building the story that a reader could easily stop reading before they get to the good stuff.

Finola and Ophelia were entertaining characters and I enjoyed their banter.

The podcasts were an odd but quirky and fun addition to the story.

I recommend this book if you like witch stories, magic, fantasy, and books set in Ireland.

The Lost Witch was published on the 27th of December and is available now.

You'll have to ask your bookshop in Ireland to order it for you (and they will be happy to do so) as it's not listed on any of the well-known bookshops below.

Or you can get the kindle version, paperback or audiobook from Amazon