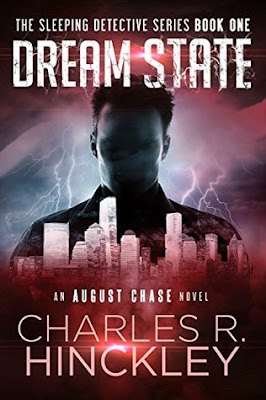 August Chase is an ordinary man plagued by extraordinary precognitive dreams. When he foresees the brutal murder of a young woman, he tracks her down to warn her. His warnings go unheeded, and the dreamed murder becomes a reality. The victim’s sister, frustrated by slow police work, enlists August’s help, and he is launched into his first case as a private investigator. Delving deep into the victim’s life, he soon discovers a common thread in the shadowy world that may have claimed her. This is book One of the August Chase Mystery Series.

A fast paced mystery with supernatural elements, Dream State is a great introduction to the Sleeping Detective series.

The whole concept of August Chase trying to prevent the deaths of people he sees in his dreams is quite thrilling. It's a race against time, firstly to find out the identity of the person, and then to convince them that their life is in danger. This leads to a lot of suspicion, fear and confrontation between August and the people he is trying to help.
I loved the sub plot running through the novel. Chase sets up his own psychic detective business and his first client proves to be a challenge. Chase's abilities are tested as he tries to help a client find out what happened to his sister. This aspect of the novel was a source of humour but also nerve tingling and creepy!
I can't wait to read more of the Sleeping Detective series.

I was provided a review copy via Word Slinger Publicity.
Posted by Just Book Talk at 15:59:00