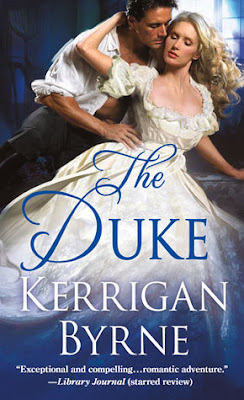 He is noble, notorious, and takes no prisoners...Strong as a Viking. Handsome as Adonis. Rich as Midas. Collin "Cole" Talmage, Duke of Trewyth, is the stuff that legends are made of. He's the English Empire's golden son--until fate has its way with him. Cole's family is killed and his closest comrade betrays him on the battlefield, leaving him gravely injured. But Cole is not one to dwell on misfortune. He is a man of duty, honor--and desire. And now he's ready for the fight of his lifetime...Imogen Pritchard is a beautiful lass who works in a hospital by day and as a serving maid at night. Years ago, when she was young and penniless, she ended up spending a scandalous night with Cole, whose tormented soul was matched only by his earth-shattering passion. Imogen entered a marriage of convenience―one that left her a wealthy widow―but she never forgot Cole. Now that her long-lost lover has turned up in her hospital, injured and with no memory of her, Imogen is torn: Is it a blessing or a curse that their past remains a secret to Cole, even as his new passion for her leaves him wanting to protect and possess her...at all costs, in The Duke, the next Victorian Rebels novel by Kerrigan Byrne.

The Duke is a little bit darker than most of the historical romances I've read lately but it made superb reading. I curled up for most of a day reading this book and I enjoyed every moment of it. The story, packed with emotional angst and longing, romance and suspense, kept me turning the pages to the end.

Although book four in a series it reads perfectly as a stand alone novel but I will definitely be going back for books 1-3 when I get the chance.

This book was just brilliant and I recommend it to all historical romance fans out there.