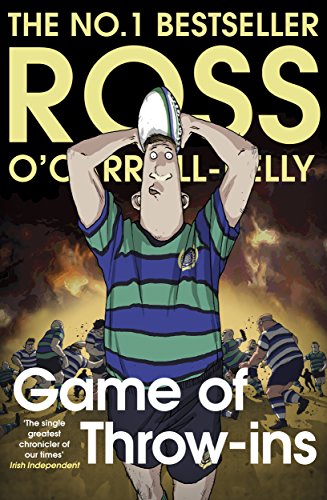 I was a rugby player with a great future behind me. A 35-year-old father-of-five with an expanding waistline, who was trying to survive the bloody battlefield we call everyday life.
My son was locked in a violent turf war with a rival Love/Hate tour operator, my daughter was in love with a boy who looked like Justin Bieber and my old dear was about to walk up the aisle with a 92-year-old billionaire who thought it was still 1936.
I was, like, staring down the barrel of middle age with the contentment of knowing that I was the greatest Irish rugby player who no one in Ireland had ever actually heard of. Until a chance conversation with an old Jesuit missionary made me realize that it wasn't enough.
I was guided, as if by GPS, to a muddy field in - let's be honest - Ballybrack. And there I finally discovered my destiny - to keep a struggling Seapoint team in Division 2B of the All Ireland League.
Or die trying.

About the Author
Paul Howard's 'Ross O'Carroll-Kelly' series are annual No 1 bestsellers - they have sold over half a million copies, are annually nominated for the Popular Fiction prize at the Irish Book Awards - where they have won the prize an unprecedented three times - and are also critically acclaimed as satirical masterpieces. Titles include The Curious Incident of the Dog in the Nightdress, Should have Got off at Sydney Parade, This Champagne Mojito is the Last Thing I Own, Rhino What You Did Last Summer, NAMA Mia!, The Oh My God Delusion (chosen as Ireland's favourite book in Eason's 2011 125th birthday poll), The Shelbourne Ultimatum and Downturn Abbey.

I remember reading The Ross O' Carroll segment in the Sunday Tribune and as I was roughly the same age as Ross I found his world and all his shenanigans to be absolutely hilarious. After all these years and many books Ross is still as funny as ever.
Ross is a complete idiot and 'let's be honest,' a bit of an ass but he is completely likeable at the same time. I inwardly cringed and cheered for him as he careened from one blunder to the next. The Netflix and Chill incident really stood out as hilarious not to mention the episode in Bundoran with the dolphin! I had my fingers crossed for him each time his team played and especially in the epilogue where he has his final golden opportunity to shine on the rugby pitch.

The witty one liners had me laughing out loud on more than one occasion and I also had a good laugh at how the accents were written. It reminds me of how people from Derry city write all their Facebook posts in 'Derry speak.' It can be a little confusing with poor grammar and bad spelling but the accent is instantly recognisable and you can hear it distinctly as you are reading. The same applies to the variations in the Dublin accent in the Ross books. The only difficulty I had was with how the New Zealand coach's accent was written. It had me completely flummoxed!

For a funny and entertaining experience this is a must read series. If you are not familiar with Ross O'Carroll Kelly I don't think you would have any difficulty diving in at this late stage with Game of Throw-ins. The story lines are quite simple and the characters are all easy to follow.

Thanks to Penguin Random House Ireland for the review copy.
Posted by Just Book Talk at 21:18:00