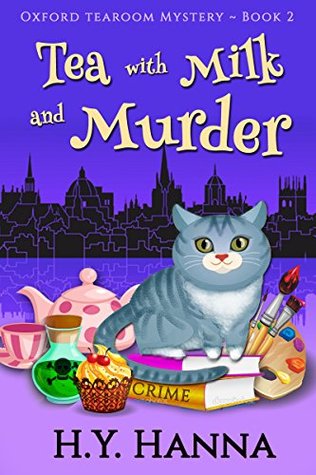 NEW SERIES! While at an Oxford cocktail party, tearoom owner Gemma Rose overhears a sinister conversation minutes before a University student is fatally poisoned. Could there be a connection? And could her best friend Cassie's new boyfriend have anything to do with the murder?Gemma decides to start her own investigation, helped by the nosy ladies from her Oxfordshire village and her old college flame, CID detective Devlin O'Connor. But her mother is causing havoc at Gemma's quaint English tearoom and her best friend is furious at her snooping... and this mystery is turning out to have more twists than a chocolate pretzel!Too late, Gemma realises that she's could be the next item on the killer's menu. Or will her little tabby cat, Muesli, save the day?(** Velvet Cheesecake recipe included!)This book follows British English spelling and usage.Clean read: no graphic violence, sex, or strong language.Genre: humorous culinary, cat cozy mystery series / women amateur sleuth / British mystery

A brilliant follow up to 'A Scone to Die For.'

In addition to the mystery, the funny side stories involving Gemma's mother working in the tearoom make for delightful and entertaining reading. Luckily, Gemma has the 'Old Biddies' on hand when things start to fall apart. They keep their noses firmly in other people's affairs and pour tea at the same time.
I love the way Muesli, the cat, is written into the story and comes to the rescue at just the right moment.

There are some developments in Gemma's love life as well but I'm hoping this aspect isn't rushed too quickly to a happy ending for her and Devlin as I am enjoying their little arguments as well as her mother's matchmaking attempts.

Oxford is described in such warmth and detail that it makes me want to hop over for a weekend, take a walk around and drop in for tea.
I can't wait for the next book in the series.

Tea with Milk and Murder can be read for free with Kindle Unlimited or purchased here
Posted by Just Book Talk at 11:21:00