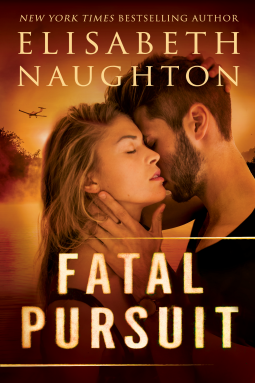 Five years ago, Aegis Security op manager Marley Addison’s lover died in a South American raid gone horribly wrong…or so she thought. When she receives a phone call telling her that he is still very much alive and in danger, she vows to bring him home safely, even if Aegis CEO and former Navy SEAL Jake Ryder has kept her out of the field for the last few years. Then Jake shows up in Colombia to help her, leaving Marley annoyed…and more than a little distracted by her alarmingly handsome boss.
As things between Marley and Jake heat up in the wilderness, they discover their rescue mission is filled with treachery. Now the domineering Jake has to rely on Marley for survival. But can she depend on him when their mission takes a shocking and deadly turn?
Fatal Pursuit is the pulse-pounding third book in Elisabeth Naughton’s scorching Aegis series.


Available to preorder now at AmazonUK
This series just keeps getting better and better. I know I've enjoyed a book when I look at the time and realise it's 2am but I refuse to go to sleep until I've got to the end. This is what happened when I picked up the ARC to Fatal Pursuit.
The author certainly knows how to torment a hero and she did this big time with Jake Ryder. He got no sympathy from me however. I enjoyed it too much and he deserved it! How could he not realise after three and a half years that he was attracted to and already half in love with Marley? It only took a bit of serious competition and a dangerous trek through the Colombian jungle to get him to wake up. I loved the strikes of jealousy and grumpiness he felt even though he refused to believe it was because he had feelings for Marley. Their interactions in South America were sweet and funny not to mention hot. There is plenty of suspense and action as well. However, the rescue mission to South America is just the beginning of the trouble for these two, both professionally and personally. The suspense kept me hooked right to the end as did the 'will they, wont they ever get together?' storyline.
The author did a brilliant job with this third installment in the series. I really hope it doesn't end as a trilogy!