Home for a Cowboy Christmas by Donna Grant (2021) 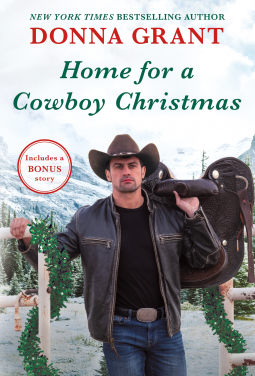 The most wonderful time of the year has arrived for this cowboy in New York Times bestseller Donna Grant's newest novel, Home for a Cowboy Christmas.Tis the season—for everyone except Emmy Garrett. She’s on the run after witnessing a crime. But when it becomes clear that trouble will continue following her, the US Marshal in charge takes her somewhere no one will think to look–Montana. Not only is Emmy in a new place for her protection, but now, she’s stuck with a handsome cowboy as her bodyguard…and she wants to do more than kiss him under the mistletoe.Dwight Reynolds left behind his old career, but it’s still in his blood. When an old friend calls in a favor, Dwight opens his home to a woman on the run. He tries to keep his distance, but there’s something about Emmy he can’t resist. She stokes his passion and turns his cold nights into warm ones. When danger shows up looking for Emmy, Dwight risks everything to keep her safe.“A captivating romance novel with a sexy cowboy making this perfect for anyone who loves a steamy romantic read.” - Fresh Fiction on My Favorite Cowboy

Despite the cutesy title, this is a seriously good romantic suspense and I found it difficult to put down. The romance is somewhat of a slow burn but I loved that as it made the story more realistic. The tension and suspense were concentrated more towards the end of the book where the inevitable showdown happens between Emmy and the people out to kill her. Emmy made a great heroine. She was scared throughout but incredibly brave and strong at the same time.
Dwight's dog was very cute and intelligent. I loved that he acted as a therapy dog for Emmy.
This was a fast-paced story with a charming romance and a suspense-filled conclusion.
A greatly entertaining read.