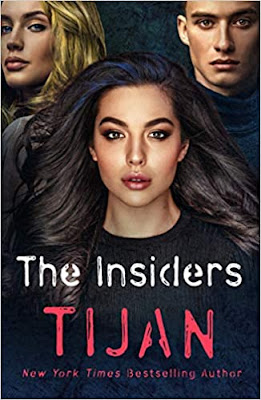 The Insiders is the first in a brand new, page-turning romance trilogy from New York Times bestseller, Tijan!Bailey is as normal as could be, with a genius IQ and a photographic memory. But still, normal for her. Then, things happen—a guy breaks into her house in the middle of the night to take her hostage. She finds out her father is actually billionaire tech genius Peter Francis, the same guy she’s idolized all her life. She learns all this when she meets dark, mysterious, and electrifying Kashton Colello. He’s an associate of her father’s, and he gives Bailey two choices—go with him and meet her father or survive on her own because those kidnappers are going to try again. It’s a no-brainer.After this, three things become clear for Bailey:1. She’s living at her father’s sprawling estate, complete with bodyguards and the best security that money can buy.2. She’s no longer an only child. She has three siblings and has no idea what to do with them and vice versa.3. She is being guarded by Kash himself. Personally guarded. And there is a lot of guarding going on there and some of it is going to drive her crazy.A complete outsider in a world of wealth and decadence, Bailey has to find her way within a family that has more secrets than she could have imagined. One of these secrets could be deadly…

This book starts off with a bang and goes at a breakneck speed. I found myself slightly confused as I couldn't quite make out who the characters were- who was the kidnapper who tried to help her and why? The scene rapidly fades to black and it jumps ahead to where she is safe. I would have liked to have been privy to actual fight scenes and rescues in this book but we don't really get to see any of that.

However, I enjoyed the tension and the build-up of suspense. There is quite a lot of mystery surrounding the people in Bailey's life and it was intriguing to puzzle it all out along with her. I didn't really understand Kash as he had very much a cloak and dagger kind of persona. It was clear that he cared for Bailey but I would have liked a prequel chapter where it shows him keeping tabs on Bailey and thwarting the previous kidnapping attempts so it would show a progression of feelings for her rather than the insta love/attraction that is presented to us.

The parts that really stood out for me were the scenes involving Bailey's brothers and sister. I loved watching her get to know them. Matt was a complex character, wild but harmless enough and I enjoyed all his crazy shenanigans. I'm hoping he will still cause some havoc and drive everyone mad in the next book. I'm also curious as to what lies in store for Bailey's parents. Will they have a second chance together? I'm quite intrigued by Kash's grandfather as well so I'm looking forward to following the rest of the series.

The Insiders is out now and it's also available in audio. Amazon