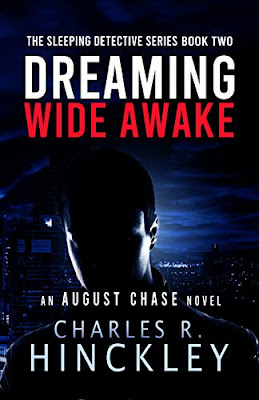 "A grounded, riveting murder mystery with supernatural touches." Kirkus ReviewsP.I. August Chase isn't feeling quite like himself. His precognitive dreams have been disrupted by a series of strange lines and rectangles. As comforting as it is not dreaming murders, it's also worrisome, because he doesn't want to lose his special powers. Gus is approached by the sympathetic sister of a convicted murderer to collect evidence and secure a new trial.  As soon as he takes on the case, Gus is recruited by a strange man who claims to be from the original Stargate Project, a government-sponsored program devoted to remote viewing, and who is now part of a group dedicated to destroying a sinister psychic program designed to control the minds of world leaders. As Gus unravels a web of police cover-ups, a string of murders, and an old connection between his stalker and his client, he realizes he may also be on the trail of a government-protected serial killer.

Having enjoyed the first book in the series I was very intrigued to find out what would happen next with Gus and his strange ability.I was expecting more of a detective story with a paranormal twist but the paranormal element in this book is really the main story. The book starts off very thrilling and gory which I loved. It then moved at a very quick pace and I found it difficult to keep up with all the strange events, the interviewing of suspects and the shady FBI characters following Gus around. It was a quite strange story but enjoyable nonetheless. It will be interesting to see what Gus does next and maybe see more character development. I feel like I know Mill better than I do Gus. He's a funny character and I'm really glad he survived this adventure.

Thanks to the author for providing me with a review copy.