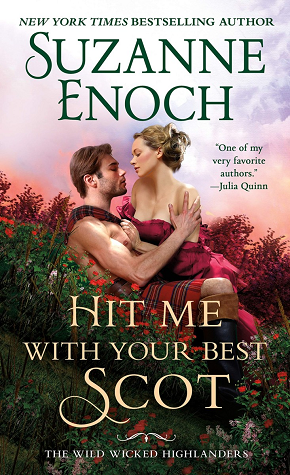 The MacTaggert brothers have one task:
Find English brides or lose their land!

Coll MacTaggert, Viscount Glendarril, is a big, brawny Highlander who doesn’t like being told what to do—not even by his exasperated English mother who is determined to see her eldest son wedded and bedded. However, when he comes to the rescue of an irresistibly beautiful woman, Coll discovers that he may have found his perfect match…

The challenge isn’t that Persephone Jones is famous, wealthy, independent, and smarter than anyone he knows. The problem is that she is not interested in marrying any man---especially not a hot-headed Scot—even if he is the only man who seems to understand who she really is even when she’s not sure herself. When Coll learns that Persephone is actually a lady-in-hiding and someone is willing to kill her for what she stands to inherit…Well, Coll has never been one to turn down a fight. When hearts are involved, nothing comes between a Highlander and his lady.

The third in the series but I read it easily as a standalone having not read the previous books in the series.There were aspects of the book that I enjoyed a lot. Persephone was a unique character for a regency heroine. She was an actress with experience of men. She is a woman of independent means and is not after a wealthy man or a title. I liked the banter between herself and Coll and I thought it quite endearing when she tried to teach him about how to approach marriageable ladies of the ton.

The story is a bit slow in places and my reading was made slower with Persephene's awkward name to pronounce in my head. The author also uses a lot of non-standard spelling for speech to show attention to the Scottish accent and so my head had to process a whole lot of naes, ye, yer, havenae, willnae, dunnae and what not which I found a bit distracting.

I did enjoy the ending as there was quite a bit of drama and humour. I didn't guess who the would-be killer was until it was revealed.

This was an enjoyable enough read and I have awarded 3 1/2 stars.

Hit Me With Your Best Scot is out now. Amazon UK