Our Little Cruelties by Liz Nugent (2020) 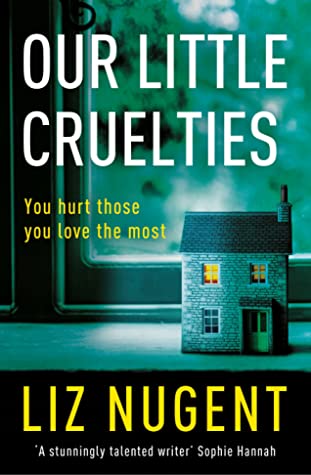 Three brothers are at the funeral. One lies in the coffin.
Will, Brian and Luke grow up competing for their mother's unequal love. As men, the competition continues - for status, money, fame, women ...

They each betray each other, over and over, until one of them is dead.

But which brother killed him?

Wow! What a cracker of a story.
There really isn't one innocent person in this book except maybe their father who was a nice but weak man.

The mother was amazing. I absolutely hated her!! The witch.

I had sympathies for each of the brothers but most especially Luke who seemed to bear the brunt of his family's little cruelties growing up.
I disliked Will most of all and I had to laugh when he got caught up in the #MeToo movement.
The story is told from each brother's point of view and it jumps timelines multiple times in their retelling. This was really cleverly done and the flow of the story was quick and enthralling. I couldn't put it down.
I was kind of dreading finding out which brother was going to die as I had weirdly liked the characters by the end but it managed to take me completely by surprise even though I was gearing up for it! It was a deliciously evil moment and I was left with a gleeful feeling that that that terrible deed and everything that came before it wasn't going to go unpunished!!

Our Little Cruelties is out now.