I'm delighted to be kicking off the blog tour for  David Beckler's urban thriller, Brotherhood.
Published by Sapere Books, it opened on the 7th of February to rave reviews. 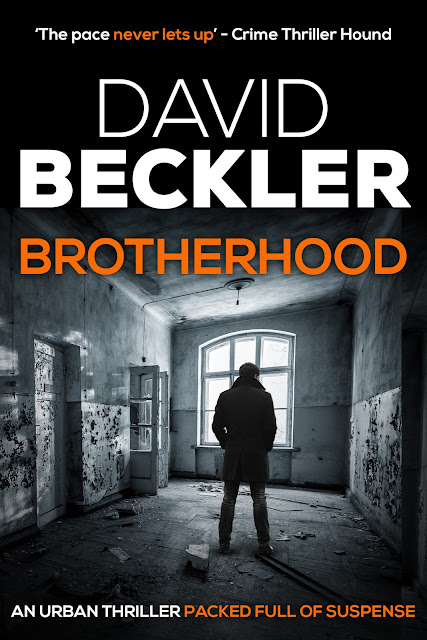 This nail-biting new thriller series will have you on the edge of your seat! Perfect for fans of Lee Child, J. B. Turner, Mark Dawson and David Baldacci… An ex-Marine is forced to confront his troubled past…

When Byron Mason’s estranged nephew, Philip, rings him out of the blue in desperate need of help, he knows he must put his personal feelings aside to protect his family.A teenage boy has been murdered, and Philip is one of the suspects.Worse than that, the dead boy was the nephew of Ritchie McLaughlin – a local thug who Byron has clashed with in the past – and Philip has now gone missing. Desperate to clear Philip’s name, Byron enlists the help of his old friend Adam Sterling to track down the real killers. Is Philip in danger? Can Byron and Adam find him before the police do?

Or has Byron’s violent past with McLaughlin come back to haunt him…?BROTHERHOOD is the first crime novel in the Mason & Sterling thriller series: gritty, hard-boiled page-turners with an urban setting. ‘A powerful and violent first chapter precedes a superb opening 100 pages, the best I’ve read this year. And the pace never lets up in this cat and mouse thriller, evocatively set amid Manchester’s threatening underworld.’ – Crime Thriller Hound‘a dark portrayal of the effects of violence on young minds’ – Murder, Mayhem and More David writes crime thrillers full of fast-paced action.
Born in Addis Ababa in 1960, he spent his first eight years living on an agricultural college in rural Ethiopia where his love of reading developed. After dropping out of university he became a firefighter and served 19 years before leaving to start his own business.
He began writing in 2010 and uses his work experiences to add realism to his fiction.
The Mason and Sterling series centre on two ex-Royal Marines, Byron who now runs a security company and Adam who is a firefighter. A strong cast of supporting characters support his protagonists. Sapere Books are publishing Brotherhood, the first novel in the series, in late 2018.


David lives in Manchester, his adopted home since 1984. In his spare time he tries to keep fit—an increasingly difficult undertaking—listens to music, socialises and feeds his voracious book habit.
Keep scrolling for an exclusive extract from Brotherhood. 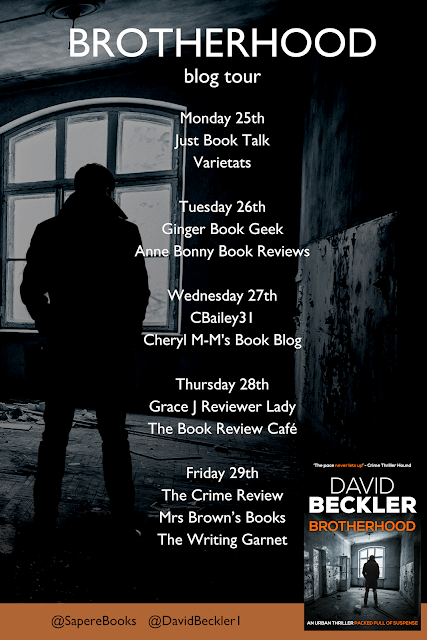 Philip Mason hunched his shoulders into his jacket and peered through the steady drizzle. He glanced behind him but the car seemed to have disappeared. He must have imagined it. Ahead, in the darkness, loomed the disused mill where the others waited. The closeness of its abandoned hulk increased his unease and his steps faltered as he approached the arched entrance into the courtyard. Liam, following a pace behind, barged into him and his head bounced off Philip’s solid shoulder.
“What you stopped for?” Liam examined his crushed cigarette before flicking it away. It hit the glistening cobbles, releasing a shower of sparks.
A feeling of dread weighed Philip down and, seized by an overwhelming urge to turn back, he studied the darkened building. The broken windows and boarded-up openings showed as darker shadows in the monolithic bulk. Philip tried not to imagine empty eye-sockets in a skull.
“Come on, Phil. I’m getting soaked.”
Dismissing a sense of foreboding, Philip shook himself and clambered over the low gate, before leading the way across the courtyard towards the entrance to the basement. The door resisted before opening with a creak, and an earthy odour enveloped them. Philip hesitated; the dark cavern absorbed the faint moonlight. Sensing Liam’s impatience, Philip made his way down the stone staircase. The darkness intensified with each step and at the bottom he paused, inhaling the stench of decay. A rustle, and a small, quick animal scuttled away from them.
“Whooo, spooky,” Liam said, and shuffled forward.
Despite his apprehension, Philip recognised his friend’s false bravado. The desire to turn and run gripped him, but it was much too late to back out now.
“Where the fuck are the others?” Liam demanded. “I’ve got better things to do on a Sunday night.”
A bright light clicked on, blinding Philip. Loud voices shouted incoherent instructions. Even though he expected this reception, Philip’s heart jumped. Four shadowy shapes rushed Liam, and Philip watched, disconnected, as the figures forced his friend into a chair.
“Take his arm.” Mugisa’s order jerked Philip into action.
He grabbed Liam’s right arm. On the other side, Asif fought to hold him. After a few seconds, Liam’s struggles subsided and, once he’d stopped shouting, Anthony recited the charge.
“Liam McLaughlin, you are charged with stealing from the brotherhood.” Anthony’s voice shook.
“How do you plead?” Mugisa demanded.
“Fuck off,” Liam said. Spots of spittle sprayed Philip’s cheek and the stink of stale cigarette smoke filled his nostrils.
Mugisa paused before responding, “The prisoner pleads guilty. We will consider the sentence.” He stepped into the shadows and held a muttered conversation with the other two.
Liam’s breathing reminded Philip of a cornered animal, but he couldn’t let his sympathy for his friend weaken him. Liam didn’t deny his crime. He’d even boasted about how much he got for the video’s he’d stolen from them. The discussion finished and Mugisa came closer.
“The punishment for betrayal is death,” Mugisa intoned with utter conviction.
Liam tried to jerk free and Philip hunched over to get a better grip of his wrist. In the ensuing silence, Ryan giggled. Even in the gloom, Philip sensed the cold glare from Mugisa, and the laughter faded.
Liam turned to Philip. “Phil, let me go,” he whispered. “Please.”
Philip stared into the darkness.