Welcome to the Blog Tour for
'An Abiding Fire' by M.J. Logue.
Sapere Books. 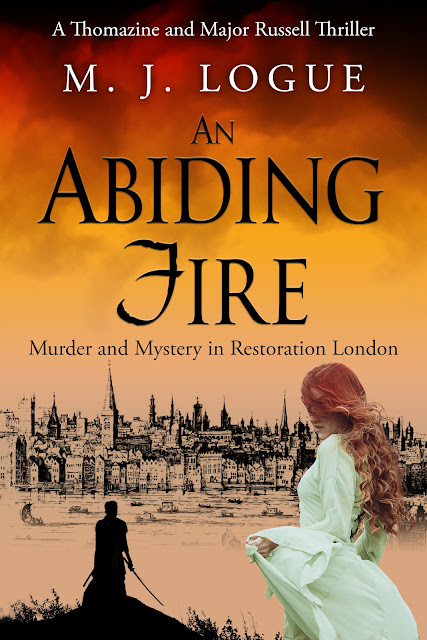 
1664, London Life should be good for Major Thankful Russell and his new bride, Thomazine. Russell, middle-aged and battle-scarred, isn’t everyone’s idea of the perfect husband for an eligible young woman but the moment Thomazine set eyes on her childhood hero, she knew they were destined for one another. But Russell, a former Roundhead, now working for the King’s intelligence service, was never going to have a simple life in Restoration London. Unable to shake suspicions of his Parliamentarian past, someone seems hell-bent on ruining his reputation — and his life. Whispers about his sister’s violent murder follow him and accusations of treason abound. When more deaths occur Russell finds himself under suspicion. He is ready to escape from the capital, but Thomazine is determined to find the truth and clear the name of the man she loves. But who is the real killer and why are they so keen to frame Russell? More importantly, will they succeed?

And has Thomazine’s quest put them all in mortal danger?

An Abiding Fire is the first book in the Thomazine and Major Russell Thriller series, compelling historical mysteries with a dash of romance, set in seventeenth century England.

An Abiding Fire is primarily a wonderful romance and clever mystery set within the backdrop of seventeenth century London.

The excellent opening scene shocked me as I wasn't expecting to be drawn straight into the action so quickly. This injection of excitement so early in the book was clever. The scene stayed in the back of my mind as I read the novel. The chapters following it were more gently paced with much of the focus being on Thomazine and Russell.

The character development is well worth the time spent on the couple. Their relationship is the most important element and will keep readers coming back for more from the pair and their shenanigans. Their interactions are full of sweet moments and lots of humour. I enjoy Thomazine as she's not afraid to speak her mind, stand up for her man and she prefers to wear ordinary, serviceable clothes than the fashionable garb required by London society. Russell is a complex character- a soldier, spy, trader and a romantic, soft mush when he is around his young wife. They make a charming couple and great partners in solving crime.

The last few chapters were particularly riveting. There was much excitement as the walls closed in on the killer Thomazine and Russell found themselves surrounded by evil and trapped in the maniac's clutches as his identity was revealed.

An Abiding Fire is an excellent read and I look forward to the next installment. 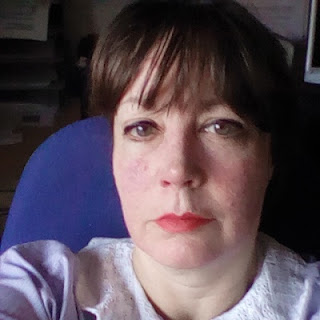 M. J. Logue (as in cataLOGUE and epiLOGUE and not, ever, loge, which is apparently a kind of private box in a theatre) wrote her first short novel on a manual typewriter aged seven. It wasn’t very good, being about talking horses, but she made her parents sit through endless readings of it anyway.
Thirty-something years later she is still writing, although horses only come into it occasionally these days. Born and brought up in Lancashire, she moved to Cornwall at the turn of the century (and has always wanted to write that) and now lives in a granite cottage with her husband, and son, five cats, and various itinerant wildlife.
After periods of employment as a tarot reader, complaints call handler, executive PA, copywriter and civil servant, she decided to start writing historical fiction about the period of British history that fascinates her – the 17th century.
Her first series, covering the less than stellar career of a disreputable troop of Parliamentarian cavalry during the civil wars, was acclaimed by reviewers as “historical fiction written with elegance, wit and black humour” – but so many readers wanted to know whether fierce young lieutenant Thankful Russell ever did get his Happy Ever After, that the upcoming series of romantic thrillers for Sapere Books began.
An Abiding Fire is available now   Amazon
Get in touch with MJ
She can be found on Twitter @Hollie_Babbitt, lurking on the web at asweetdisorder.com, and posting photos of cake, cats and extreme embroidery on Instagram as asweetdisorder. 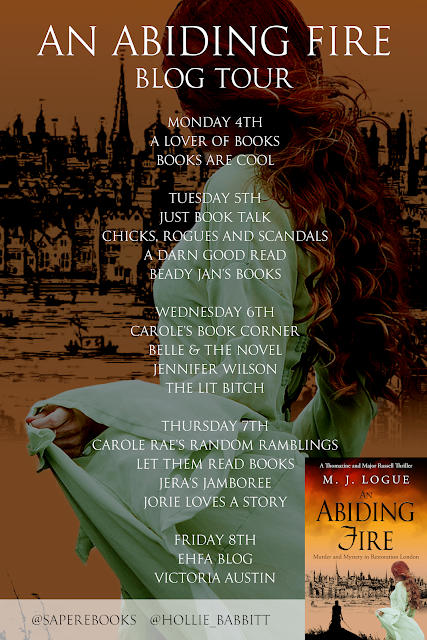