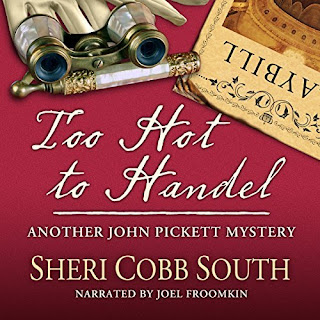 When a rash of jewel thefts strikes London, magistrate Patrick Colquhoun deploys his Bow Street Runners to put a stop to the crimes. The Russian Princess Olga Fyodorovna is to attend a production of Handel’s Esther at Drury Lane Theatre, where she will wear a magnificent diamond necklace. The entire Bow Street force will be stationed at various locations around the theatre - including John Pickett, who will occupy a box directly across from the princess.

In order to preserve his incognito, Pickett must appear to be a private gentleman attending the theatre. Mr. Colquhoun recommends that he have a female companion - a lady, in fact, who might prevent him from making any glaring faux pas. But the only lady of Pickett’s acquaintance is Julia, Lady Fieldhurst, to whom he accidentally contracted a Scottish irregular marriage several months earlier, and with whom he is seeking an annulment against his own inclinations - and for whom he recklessly declared his love, secure in the belief he would never see her again.

The inevitable awkwardness of their reunion is forgotten when the theatre catches fire. In the confusion, the Russian diamonds are stolen, and Pickett is struck in the head and rendered unconscious. Suddenly it is up to Julia not only to nurse him back to health, but to discover his attacker and bring the culprit - and the jewel thief - to justice.
©2016 Sheri Cobb South (P)2018 Sheri Cobb South

This is a superb series and after listening to this instalment I just wanted to go back to the very beginning and listen to the whole thing again, starting with John Pickett's early years in 'Pickpocket's Apprentice.'

The mystery of the stolen jewels wasn't very difficult to work out but I really loved following  Julia on her attempts to solve the crime especially as John wasn't in a position to do so himself. I liked that familiar characters popped up to lend a hand or cause mayhem as the case may be.

One of my favourite scenes was at the theatre when the jewels were stolen and fire broke out. It was very exciting stuff and John showed, yet again, how heroic and romantic he is.

A brilliantly entertaining series. I can't wait to listen to book 6.