Lady Helena Investigates: Book One of the Scott-De Quincy Mysteries by Jane Steen (2018) 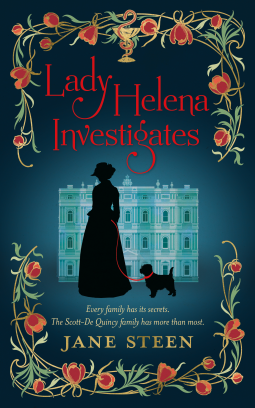 A reluctant lady sleuth finds she’s investigating her own family.
Step into Lady Helena Whitcombe’s world with the first novel in a series that will blend family saga and mystery-driven action with a slow-burn romance in seven unputdownable investigations.
1881, Sussex. Lady Helena Scott-De Quincy’s marriage to Sir Justin Whitcombe, three years before, gave new purpose to a life almost destroyed by the death of Lady Helena’s first love. After all, shouldn’t the preoccupations of a wife and hostess be sufficient to fulfill any aristocratic female’s dreams? Such a shame their union wasn’t blessed by children . . . but Lady Helena is content with her quiet country life until Sir Justin is found dead in the river overlooked by their grand baroque mansion.
The intrusion of attractive, mysterious French physician Armand Fortier, with his meddling theory of murder, into Lady Helena’s first weeks of mourning is bad enough. But with her initial ineffective efforts at investigation and her attempts to revive her long-abandoned interest in herbalism comes the realization that she may have been mistaken about her own family’s past. Every family has its secrets—but as this absorbing series will reveal, the Scott-De Quincy family has more than most.
Can Lady Helena survive bereavement the second time around? Can she stand up to her six siblings’ assumption of the right to control her new life as a widow? And what role will Fortier—who, as a physician, is a most unsuitable companion for an earl’s daughter—play in her investigations?A new series by Jane Steen, author of the House of Closed Doors series that has delighted thousands of fans (over 300 5-star reviews on Amazon and over 700 5-star ratings on Goodreads.) If you’re looking for an unputdownable Victorian mystery saga, here’s where you start!

An exciting start to a new series. This historical mystery is a little bit darker than most of historical mysteries that I've read lately.
Lady Helena at first appears to be quite a mild and meek character who is easily dominated by her older siblings. However as she gets mixed up in an investigation to find out what really happened to her husband Helena discovers hidden depths and a strong will. I enjoyed watching her grow and take charge of her life.
There was plenty of mystery surrounding the death of her husband as well as other goings on in their little community. Just when I thought she had everything figured out the story took another turn and I was left completely surprised with revelations about her family. All the threads wove together perfectly to create a wonderful web of intrigue, murder, love, and old family secrets.
Lady Helena's investigative partner is the French doctor Armand Fortier. There is an air of attraction between the pair but Fortier proves to be another man of mystery and we are left with the feeling that he is hiding quite a lot from Helena and maybe can't be trusted completely with her heart.

I quite enjoyed Lady Helena's interactions with her brother's man of affairs. She is quite snobbish in her dealings with him and she thoroughly dislikes him which I found quite entertaining. I can't help but feel there could be a reluctant friendship and possible romance there if things don't work out with Fortier.

I was impressed with this first in the series and I look forward to reading the rest of the series as it becomes published.