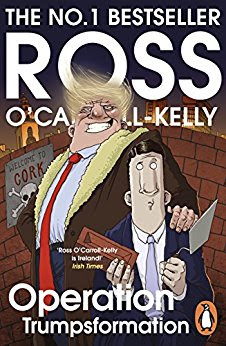 'Our nation's great satirist ... the most sustained feat of comic writing in Irish literature' Irish Times
It's the end of the world as Ross knows it ... this time, there's no way of escaping another monumental fock-up!
Sorcha had thrown me out of the family home - this time apparently for good. And yet that was the least of my worries ...
My old dear was in prison, accused of murdering her second husband. My sons were showing an unhealthy interest in - someone call social services - soccer! And my daughter wanted everyone to call her Eddie. But don't even go there!
On top of all that, a blond wig discovered in a dusty attic, had given my old man delusions of power. Suddenly, he was running for election, promising to tear up the bailout deal and take Ireland out of Europe. And that's to say nothing of his secret plan for Ireland's second city ...
But shush! Don't mention the wall!

If you want to give the gift of fun and laughter this Christmas then you go won't go wrong with the latest Ross O Carroll Kelly book.
Thoroughly entertaining, hilarious, witty and sharp. The series has lost none of its edge.