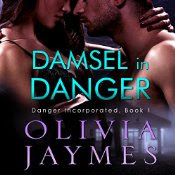 Ex-DEA agent Jason Anderson is trying to rebuild his life after being held prisoner by a sadistic drug cartel. With a little help from his friends, Logan Wright and Jared Monroe, he's starting a new business and moving forward. He only thinks about the past during the long, dark nights. It's then that he feels most alone.
Brinley Snow has moved into her dream home. It's everything she's wanted and more, although she faces a mountain of renovation work. Luckily, it came with the bonus of a sexier-than-sin neighbor. One sultry summer night, Brinley gathers up her courage and asks Jason to join her for dinner. They're instantly attracted to one another, but the evening quickly goes downhill when she ends up in the interrogation room of the local police.
An unknown dead man had her address clutched in his hand. The authorities - and Jason - think she's the key to finding a cold-blooded murderer. With a first date like that, Brinley's not sure she'll survive a second. Then again she's never met anyone like Jason. He's not the typical boy next door. He's all man. And with a little luck, he could become all hers. They just have to stay alive long enough to catch a killer.


I would recommend this audiobook to all my friends who like mysteries with a little bit of romance. It is well narrated and the story has a good pace. I liked the narrator's tone of voice and expression. He has a nice voice, easy to listen to.

I liked the story and will definitely be looking out for the rest of the series. The mystery was good and interesting. The many twists and turns kept me entertained and had me guessing right to the end.
Both Jason and Brinley are well developed and likeable characters. They each have a detailed and interesting back story. Jason also has good friends and brothers who supported the  story and I liked their teasing banter which added some humour.


I received a copy in exchange for an honest review.
Posted by Just Book Talk at 19:35:00