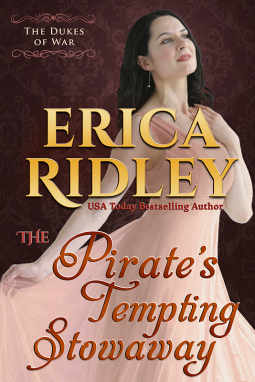 Captain Blackheart leads a simple life of roving the seas, wenching and treasure-hunting. He steers clear of romantic entanglements that could tie him to land. He shouldn't have any trouble keeping his hands off the gently-bred lady he's commissioned to abduct—except his cargo turns out to be feisty and passionate! She'd be a prize worth treasuring, if having her aboard didn't jeopardize everything...Clara Halton thought the worst loss she could suffer was to be stripped of her family, stricken with consumption, and left to die alone. Then she meets Blackheart. Their attraction is ruinous...and irresistible. When he delivers her like so much plunder, his mission is over — but hers has just begun. She'll force him to acknowledge their connection, even if she must storm his ship to do it!

Review
I really enjoyed this tale of romance between the unlikely couple, Clara and Captain Blackheart. The captain isn't as fearsome as his name suggests. His character comes across very well early in the story when he finds Clara ill and isolated at her home in America. He can be a little bit gruff but he proves to be quite gentlemanly, heroic and has a nice sense of humour. He takes good care of Clara who is very ill at the beginning of the story and he deposits her safely at her parent's doorstep as promised.
A reader unfamiliar with previous titles in the series might find Clara's reunion with her parents, after so many years apart, to be resolved at breakneck speed and without much elaboration. You really need to read her daughter, Grace's story, in 'The Earl's Defiant Wallflower,' to enjoy the complete picture.
The Pirate's Tempting Stowaway is a fast paced, humorous, romantic story that will take you away for a few delightfully escapist hours.

Highly recommended.
If you have missed the other titles in the series the first book is currently free to download at Amazon

The Dukes of War historical romance books in series order:


I received a copy in exchange for an honest review.
Posted by Just Book Talk at 15:17:00