In Your Sights (Sydney Triptych #1) by Elizabeth Krall 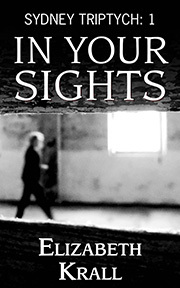 'Caroline Bready is being watched. Someone has posted a photograph of her on a mysterious website. Still struggling to rebuild her life after the unsolved death of her husband, Caroline tells herself that the photo is unimportant. She drifts into an affair with a colleague; the relationship begins casually, but quickly becomes intense and disturbing. After Caroline discovers the first victim of a serial rapist who has begun to attack women in Sydney, another photograph appears. Are the online images a threat, or simply coincidence?
Against a backdrop of deception and lies, Caroline finds herself drawn to an enigmatic stranger. Is he protecting her, or does he mean her harm? If Caroline cannot distinguish

friend from foe, it could cost her life.
In Your Sights is Book 1 in the Sydney Triptych series of suspense novels.'

A very compelling read that is difficult to put down. There is a creepiness that pervades the entire novel which adds to the intrigue and suspense. It is difficult to pinpoint where the exact threat is coming from because the characters are all so flawed and not very nice at times. The author is certainly not afraid to add shock factor which is evidenced in the depiction of Caroline's romantic involvement with her co-worker.
I loved that there was a plethora of really nasty characters in the book and I couldn't help but want to yell at Caroline a few times. You can't jump to any early conclusions in this story. Just when you think you have it figured out the author turns the story on its head and you have to reassess your thinking. Any one of the people in Caroline's social sphere could be the stalker and/or the Redback Rapist who has been terrorizing the women of Sydney and its environs for the past four years.
A chilling blend of psychological thriller, romance and mystery.
Posted by Just Book Talk at 17:05:00