See No Evil, My Pretty Lady by Miss Mae. Narrated by Marcus Hyde 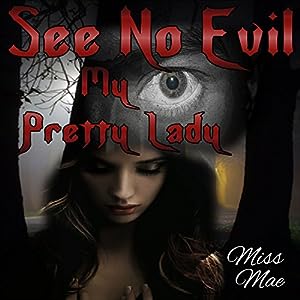 An absorbing and entertaining murder mystery set in Victorian London at the time of the Whitechapel murders. The writer's twist on an old story is both well written and clever. The story is full of interesting characters with a good few red herrings and likely suspects to keep you guessing right to the end. Dorcy and Gareth were two very likeable characters and I enjoyed the nod to the gothic romance genre in the way their relationship unfolded.

The story starts off with Dorcy's discovery of Mr. Davenport's dead body and her subsequent attack by an unknown assailant. It is not long before we are introduced to the other main characters. To fulfil a request from the dead man's will all the suspects and the police inspector take up temporary residence on an isolated island, in the hopes of discovering the identity of the murderer, who is also believed to be Jack the Ripper. Soon there is a series of sinister events, tricks and attacks. Tensions are rife and it isn't long before suspicions and accusations abound.

The police inspector is another interesting character and I'm hoping that Miss Mae has plans to write more mysteries for him to solve, along with help, of course, from Gareth and Dorcy.
The narrator Marcus Hyde did a wonderful job of bringing all the characters to life and his telling of the story added to the wonderfully gothic atmosphere of the novel.
I'm a huge fan of historical mysteries and romance so I loved this addition to the genre.